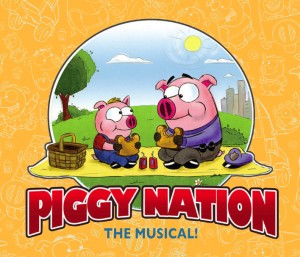 In a time when it’s tough to find a child not carrying around some type of electrical
device to play with. it was wonderful to stumble upon this Off  Broadway musical
Piggy Nation: A Day At Work With Dad.
Piggy Nation, based on the book, both written by Richard Rosser entertained the audience filled with
parents, grandparents and children. This musical features an original score filled with rock, blues, rap and
gospel influences that keeps the audience engaged throughout the musical. 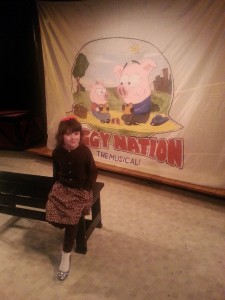 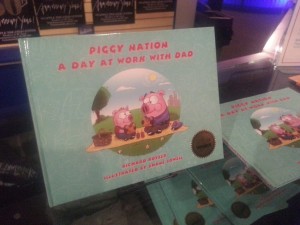 Piggy Nation: A Day At Work With Dad lets your imagination take the lead as the
actors gone animals lead us through a story that teaches children about values and helps
parents and adults to see the importance of good role models. Lessons of thoughtfulness,
honesty and courtesy are all highlighted during this a little over an hour musical.
Although props are few, talent is abundant!
We had the amazing experience of meeting up with author, Richard Rosser, who could not have been
any nicer. He spent time chatting with everyone and took the time to preview the book with my daughter before showtime. My son had a chance to interview him on his vlog: TheKingsVlogs
You can grab some tickets for Piggy Nation The Musical NYC right here.
Check out more about Piggy Nation here.
Enjoy Piggy Nation The Musical during Spring time in NYC!
We have a ticket giveaway coming up soon.
Snapple Theater Center
210 W. 50th Street (at Broadway)
New York, NY 10019
Saturdays at 11am & 5pm
Sundays at noon
3 Easy Ways to Buy Tickets
www.ticketmaster.com
By Phone: 212-921-7862
In person at the Snapple Theater Center box office
Disclosure: Review/Giveaway tickets provided by Piggy Nation The Musical.
All opinions are that of Diane Sullivan. Email me at ELGeorgia@aol.com
Facebook.com/3decades3kids Twitter @3decades3kids
0 Flares Twitter 0 Facebook 0 Pin It Share 0 Google+ 0 Email -- Filament.io 0 Flares ×