Giveaway: Win a 4 Pack of Tickets
Bello Returns to NYC
in Bello-Mania! This March 15-31 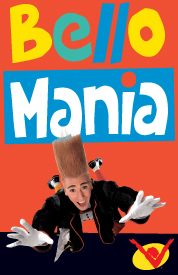 Bello Nock, the circus superstar Time Magazine calls “America’s Best Clown,” will amuse and amaze children of all ages as he
performs his unique blend of comic daredevilry in a theatrical setting for his brand new show, Bello Mania. Adding a unique andpersonal touch to the big thrills and laughter audiences have come to expect from their favorite entertainer, Bello will be joined on stage by his daughter Annaleise and supported back stage by his wife, Jennifer, and daughter Amariah. The U.S. premiere of Bello Mania is a true family affair that will perform at The New Victory Theater, 209 West 42nd Street, from March 15-31, 2013.


“I’m really excited about Bello Mania, because I have always wanted to create a show of my own that gives the audience a sneak peek into my world,” said Bello, who will wow audiences with stunts on a sway pole, balance a chair on a high wire and perform tricky trampoline mayhem as only he can do. “Every life has a story and I want to share a little of mine, while doing what I love. Bello Mania is as much about honoring my unique family heritage as it is about bringing thrills and everlasting memories to kids of all ages,” he concluded.

His wife, Jennifer, writes and directs, while daughter Amariah keeps things in line backstage as the production stage manager. Though she won’t be wearing Bello’s signature gravity-defying hairdo, 16 year-old Annaliese follows her father’s footsteps to become an eighth generation performer born to a family of daredevils, ballerinas, equestrians and opera singers.
Born Demetrius Alexandro Claudio Amadeus Bello Nock in Sarasota, Florida, Bello is the most honored modern day circus celebrity.  He is featured in the 2013 edition of the Guinness World Book of Records for the first ever high wire walk over a cruise ship at sea; in 2011, he received the circus world’s highest honor, the Gold Clown (presented by Princess Stephanie of Monaco), at the Monte Carlo International Circus Festival. Bello was the Ringling Museum’s 2012 “Circus Celebrity of the Year,” and in 2009 was the youngest person ever inducted into the Circus Ring of Fame. He’s won the Silver Clown in Monte Carlo, the Gold Lion in Lausanne, Switzerland, the Prix Special in Grenoble, France, and again at the Daidogei World Cup Festival in Japan. Bello has also won the Walt Disney Award for Creative Entertainment.

He spent several years with Mexico’s Circo Atayde before joining the prestigious Big Apple Circus in 2000. He stayed with the company for three seasons, leaving after his final tour, Bello and Friends. Beginning in 2004, he wooed millions as a star of the Ringling Bros. and Barnum & Bailey® Circus, becoming the only person in the company’s history to have a production named after him. The show was called Bellobration, and toured the U.S. from 2007-2008.

Bello also designs and builds all of his own stunts and riggings, including the Double Wheel of Steel and the Aqua Trap.  As a self-proclaimed “comic daredevil,” he has hung by his toes under a helicopter flying over the Statue of Liberty, walked a high wire from the NYC Ballet to Avery Fisher Hall, repelled off of Madison Square Garden and ridden an elephant through the Mid-Town Tunnel.

Bello Mania is his first independent production. Performing alongside him is Dave Cox, Zebulon Fricke and Annaliese Nock. The cast is accompanied by a creative team of Jennifer Nock for Direction, David Miller for Set Design, Guido Naus for Musical Direction, Eric Winterling and Kay Torralva for Costume Design and Steve Curtis for Safety and Technical Direction.

Bello Mania is recommended for everyone 4 and over.

Theater-goers who buy tickets for three or more New Victory shows in the current season qualify for free Membership benefits, including up to 35-percent savings on tickets all season long.  To purchase tickets online, visit NewVictory.org, and to purchase by phone, call 646-223-3010.  The New Victory Theater box office (209 West 42nd Street) is open Sunday and Monday from 11am-5pm and Tuesday through Saturday from 12pm-7pm.

For more information, visit www.NewVictory.org.
GIVEAWAY
Win a family 4pack of tickets to Bello-Mania! at New Victory Theater!
Tickets are good March 15th 7pm opening night show.
Contest ends March 11th at 11:59pm and notified by email. Winner has 24 hours to
respond before a new winner is chosen. Enter on Rafflecopter below. 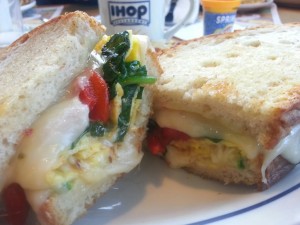 My family and I are always in search of a delicious menu option so when we were invited to
check out the new IHOP Griddle Melts we could not resist. IHOP is already a place we love to frequent, but I have to admit we generally go there for the pancakes. Today we tried out something new and could not have been any more pleased. I am always leery about trying out something that has a picture in the menu or advertisement. It seems that the item never lives up to what you expect. As you can see from the photos, the griddle melts look exactly the same as advertised and even better. There are three griddle melts to choose from:  Ham and Egg Griddle Melt, Western Griddle Melt, and Spinach Roasted Red Pepper and Cheese.
Hubby went with the Western and I chose the Spinach Roasted Red Pepper and Cheese.
They were both delicious. If you are a melted cheese fan you will love this choice.
It tastes as good as it looks!
HOP’s menu now includes three varieties of Griddle Melt sandwiches, each hand-crafted and made-to-order for each guest, served on artisan sourdough bread with a choice of three fluffy omelets in a large breakfast sandwich, making each sandwich an excellent value for consumers. Half sandwich servings are also being featured on the menu.
“Breakfast sandwiches are the largest selling breakfast items out of the home, with more than 55 billion servings consumed each year. Our new Griddle Melts bring our guests a breakfast sandwich that lives up to our high standards of excellence and value and they can only be found at IHOP,” said Natalia Franco, Senior Vice President, Marketing, International House of Pancakes, LLC. “Our culinary team has created three delicious varieties of Griddle Melts, each using the finest ingredients, and in a hearty size that requires both hands—even for the half sandwich.
“While others may offer guests breakfast sandwiches that are pre-made in advance, every single Griddle Melt sandwich is custom made for each guest,” Franco continued. “Bursting with flavor, Griddle Melts are a meal in themselves, a hearty breakfast sandwich that our guests will want to sit down and savor. And at $4.99 for a half sandwich it’s a great value and I encourage guests to try all three before choosing their favorite!”
Griddle Melt varieties include:

For more information or to find an IHOP restaurant near you, please visit www.ihop.com. Follow IHOP on Facebook at www.facebook.com/ihop.

Disclosure: Gift Card provided by IHOP.
All opinions are that of Diane Sullivan.
Email me at ELGeorgia@aol.com
Facebook.com/3decades3kids
Twitter @3decades3kids