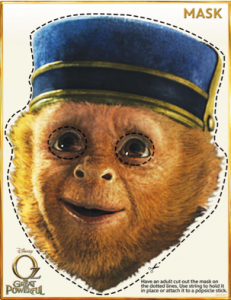 In honor of OZ the Great and Powerful
Now in theaters we have some awesome
activity sheets for the kids(of all ages) to have fun with
after the movie. I have a feeling at least one of my children will have this
Finley mask on by bedtime tonight!
http://www.disney.com/thewizard 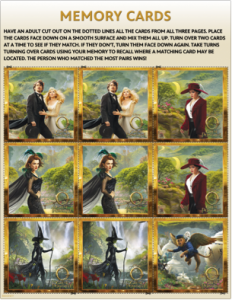 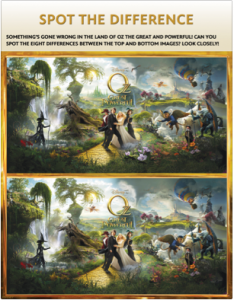 Disclosure: All materials provided by Disney Pictures.
Diane Sullivan Email me at ELGeorgia@aol.com

Oz the Great and Powerful

Disney’s new film Oz the Great and Powerful follows the Wizard himself as he first arrives in the land of Oz. But if you think that’s all there is to it, you’re as dead wrong as the Wicked Witch of the East is, well, dead.

The story centers on Oz, played by James Franco, who is immediately established as a conman in magician’s clothing. In the film’s black and white opening, we see him pulling the wool over the eyes of the people of Kansas, both on and off the stage. Oz is theatrical, cunning, and shrewd through and through. Yet when his double-dealing catches up with him, and he angers the circus strong man, Oz sees only one option– escape. He hops aboard a hot air balloon, and faster than you can say, “We’re not in Kansas anymore,” he is whisked away by a tornado to the land that bears his name, where he quickly becomes embroiled in a power struggle between Oz’s three witches.

As the Wizard makes his way across the land of Oz, there is no shortage of familiar faces and places to the average moviegoer, for even if you’ve only seen The Wizard of Oz once, you’ll be sure to recognize the Emerald City, the yellow brick road, munchkins, flying monkeys, and of course, the green-skinned Wicked Witch of the West.

But just who is this Wicked Witch? We meet three different witches when the Wizard arrives in Oz– Theodora (Mila Kunis), her sister Evanora (Rachel Weisz), and Glinda (Michelle Williams)– but none of them appear as the Wicked Witch we’re all familiar with… at least until about halfway through the film. The way that Oz the Great and Powerful handles the transformation of one of these witches into the villain we know is undoubtedly one of the better elements of the film. (I would like to add here, though, that fans of Wicked must beware– this movie tackles the origins of the Wicked Witch of the West according to the works of L. Frank Baum, author of The Wizard of Oz.As such, it does not fit with Gregory Maguire’s alternate take on Oz in Wicked, or the musical that is based on it. Don’t look for Elphaba here.)

Oz the Great and Powerful is a wonder to behold from beginning to end. Visually it stuns, presenting the land of Oz in its crisp and whimsical beauty, particularly in 3D (a well-used and welcome addition to this film.) Danny Elfman’s haunting score defines Oz as well, giving equal merit to both the lighthearted and magical aspects of this land and to its shadowy and somewhat frightening dark side. Speaking of frightening, fans ofSam Raimi‘s Evil Dead films will be pleased to see that the director has not lost his zany and macabre tendencies, particularly in his use of stalking, first-person camera at times, his almost comical treatment of the dangerous twister that brings the Wizard to Oz, and a hilarious cameo from Raimi’s muse Bruce Campbell.

All in all, Oz the Great and Powerful is a delight– a film that can appeal just as much to a childlike sense of wonder as it can to an old soul or classic movie lover who respects the original Wizard of Oz, not that the two are mutually exclusive! It is, in short, not agreat film, but more than that– it is a good film. (Trust me, once you see it, you’ll know what I mean.)

Giveaway: Mattel Save the Bunny Sweepstakes

Mattel is responsible for delivery of prizes. Contest ends March 31, 2013.

Being a Kids Club Thirteen Ambassador I have the privilege of experiencing the awesome events that Kids Club Thirteen provides. Having spent twenty years as an elementary school teacher and being a mom of three, I feel as if PBS is a staple in my life. We have come to love so many of the characters and programming over the years. One of our favorites is Sid The Science Kid! Our family is looking forward to the premiere screening of Sid The Science Kid: The Movie this Saturday at The American Museum of Natural History, NYC. This event is one of the Thirteen Special Private Events for Kids Club Thirteen Members that is hosted throughout the year.
Although the screening is private, the crafts and activities surrounding it are open to the public.
It’s a great opportunity to check out just how awesome a Kids Club Thirteen can be for your family.
Families that join Kids Club Thirteen are invited to Thirteen special private events throughout the year (you can join in at any time) for free, after paying a one time membership fee of $75 which includes 2 adults and up to 3 children. From experience I can tell you that if you visited the museum on a regular day you would come close to paying the same for a one time visit.
That is how it works for any of the events you are invited to and most of them the children leave with some goodies they did not arrive with. There is no time like the present to become a Kids Club Thirteen Member! I’m not there sales person, but I know a wonderful membership when I see one.
As for the event itself, hope to see you there. If you have any questions about Kids Club Thirteen or this event do not hesitate to email kidsclubeditor@thirteen.org with them.
Explore science and meet every kid’s favorite little scientist, Sid! As part of a special membership experience at the American Museum of Natural History, we will be screening the premiere of Sid The Science Kid: The Movie to museum and Kids Club THIRTEEN members. The day will be filled with activities, photo opportunities, and a meet and greet with Sid the Science Kid!
Crafts and activities are open to the public. Kids Club members enjoy a private members-only screening of the premiere of Sid the Science Kid: The Movie from 2:30 p.m. to 3:45 p.m. Please RSVP for the screening by emailing kidsclubeditor@thirteen.org with the number of adults and children in your party.
Not a member? Learn more about a membership to Kids Club THIRTEEN and join today.
For more information on the museum, visit the American Museum of Natural History website.
Disclosure: Special events provided as part of the Kids Club Thirteen
Ambassador Program. All opinions are that of Diane Sullivan.
Email me at ELGeorgia@aol.com
Facebook.com/3decades3kids
Twitter @3decades3kids