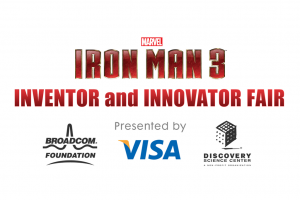 As if Iron Man 3 will not be awesome enough, I can’t imagine how lucky twelve finalists for this contest will be? This is a fantastic chance for any child between 6th and 9th Grade! It’s so worth a try, you never know, it could be you! CALLING ALL ASPIRING INVENTORS!  It’s time to channel your inner Iron Man/Tony Stark and let your inventing imagination go wild.  Discovery Science Center, Broadcom Foundation and Marvel Studios, along with Visa Signature and the famous El Capitan Theatre in Hollywood, are proud to team up to sponsor a nationwide Marvel’s IRON MAN 3: INVENTOR and INNOVATOR FAIR in conjunction with the May 3rd release of Marvel’s IRON MAN 3, starring Robert Downey Jr.


The 12 finalists of the Marvel’s IRON MAN 3: INVENTOR and INNOVATOR FAIR will win a trip to Southern California, provided by Visa Signature. The trip includes a behind-the-scenes tour of Disney Studios, a meeting with Disney Imagineers, a trip to Disneyland, a visit to Discovery Science Center, and more!  INVENTOR and INNOVATOR FAIR finalists will also have their projects on display at the famous El Capitan Theatre in Hollywood, California, from May 3rd – June 20th.  The competition concludes at the El Capitan Theatre on May 3rd when four Grand Prize winners will accept their awards at a special ceremony, on stage prior to the showing ofMarvel’s IRON MAN 3.

Sixth through ninth-grade girls and boys across the nation are invited to participate, including those who have competed in Broadcom MASTERS®, a program of Society for Science & the Public (SSP).

For more information, rules and how to apply, visit www.discoverycube.org/ironman3.

Marvel’s IRON MAN 3: INVENTOR and INNOVATOR FAIR participants are the next generation of forward thinkers and innovators that will lead us into the future with scientific breakthroughs, engineering feats and technological advances. They are the real-life Tony Starks of tomorrow!” said Mike Pasciullo, Marvel’s SVP, Brand Planning & Communications.
Participating students are being asked to produce innovative, inventive projects based on themes from Marvel’s IRON MAN 3 —science, technology, engineering and math-related concepts and practices. Marvel’s IRON MAN 3: INVENTOR and INNOVATOR FAIR competition is encouraging students to submit projects that align with the National Academy of Engineering’s (NAE) Grand Challenges for Engineering™.

Some of the themes of the NAE Grand Challenges related to Marvel’s IRON MAN 3 are: (1) Develop Carbon Sequestration Methods, including projects involving themes of eco-friendly car development; (2) Engineer Better Medicines, with projects that focus on global disease prevention, limb regeneration and the study of body armor that protects injured body parts such as the heart; (3) Secure Cyberspace, inspiring projects that can lead to the development of new technologies that can redefine innovative security measures; and (4) Engineer the Tools of Scientific Discovery, in fields such as micro-technology, aeronautics or robotics.


About the Movie
Marvel’s IRON MAN 3 pits brash-but-brilliant industrialist Tony Stark/Iron Man against an enemy whose reach knows no bounds. When Stark finds his personal world destroyed at his enemy’s hands, he embarks on a harrowing quest to find those responsible. This journey, at every turn, will test his mettle. With his back against the wall, Stark is left to survive by his own devices, relying on his ingenuity and instincts to protect those closest to him. As he fights his way back, Stark discovers the answer to the question that has secretly haunted him: does the man make the suit or does the suit make the man?

Starring Robert Downey Jr., Gwyneth Paltrow, Don Cheadle, Guy Pearce, Rebecca Hall, Stephanie Szostak, James Badge Dale with Jon Favreau and Ben Kingsley, Marvel’s “Iron Man 3” is directed by Shane Black from a screenplay by Drew Pearce & Shane Black and is based on Marvel’s iconic Super Hero Iron Man, who first appeared on the pages of “Tales of Suspense” (#39) in 1963 and had his solo comic book debut with “The Invincible Iron Man” (#1) in May of 1968.

Disclosure: All information provided by Disney Pictures.
All opinions are that of Diane Sulivan. Email me at ELGeorgia@aol.com.
What Does The Bunny
Put Into Your Basket?
Every year the combination of Spring and Easter cannot help but make me smile. I feel blessed to still have an Easter Bunny believer in the house. Since my oldest son is 22, I have been Easter-Bunnying a long time.
When basket building time rolls around the big question kicks in, Candy vs. Toys.
Although I do grab a toy or two candy does always end up in the basket.
This year I found these awesome Star Wars Bunny Stormtroopers and a few other fun candy staples. I found all of the goodies below at Walmart and Rite Aid. I thought the huge lollipop with 15 littles inside for $3.00 was awesome. My daughter always wants to $25 version at FAO Schawrz so this was a great substitute.
I’m sure there will be a few more additions to the baskets( I heard the EB ordered a Cinderella toy and some video games), but this is what the bunny has been collecting so far! 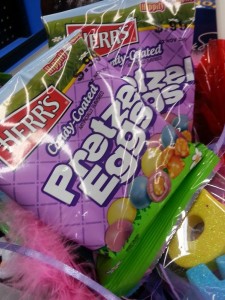 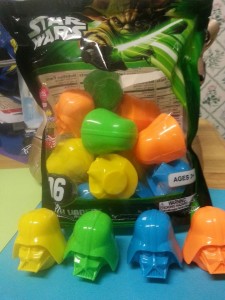 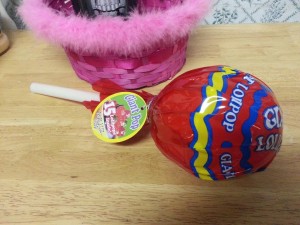 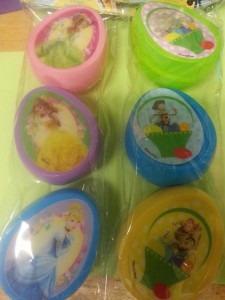 Disclosure:
All opinions are that of Diane Sullivan.
Email me at ELGeorgia@aol.com
Facebook.com/3decades3kids
Twitter @3decades3kids