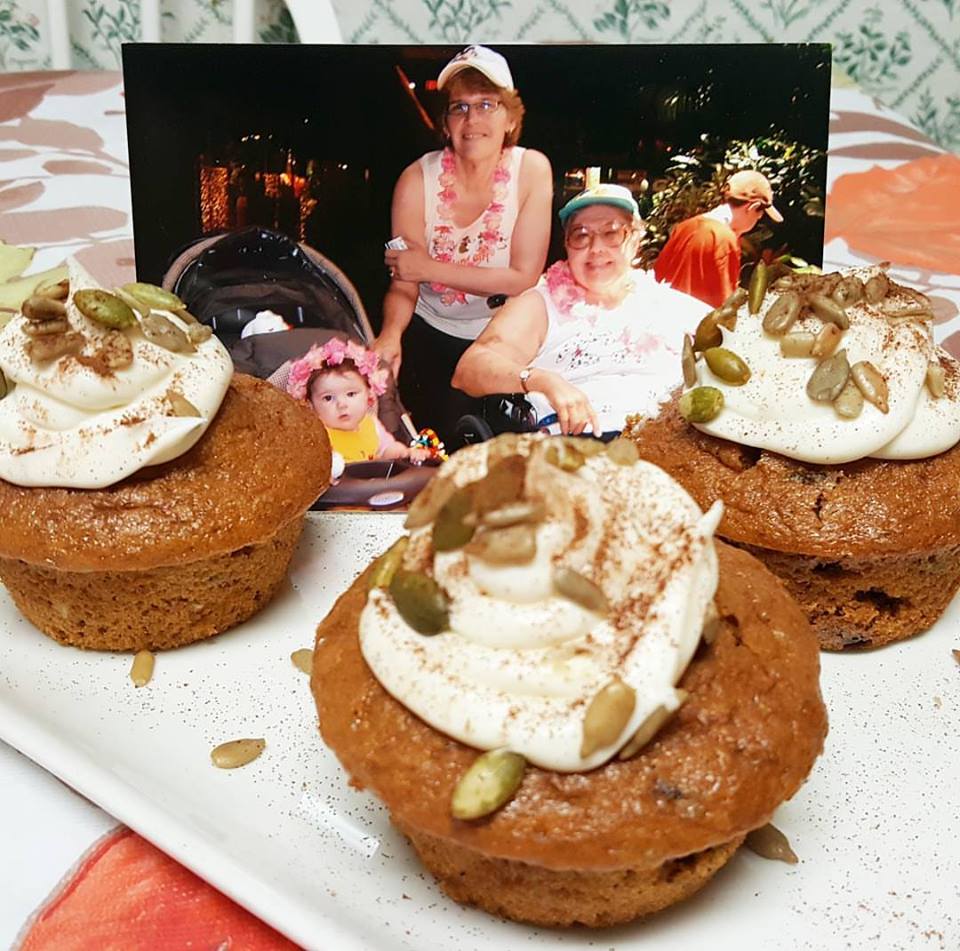 There is one thing you may not know about me although my life is pretty much an open book. Breast Cancer is something I know a lot about. My mom had breast cancer and a mastectomy because of it. I was terrified of the entire experience and just did not understand anythinga bout breast cancer while the entire thing was going on. I did know one thing, my mom was scared but tough and so was I. As time went on I learned more about the cancer and also how it takes anyone it wants to. There is no rhyme or reason. If you do know someone with breast cancer the best thing you can be for them is available. Be there to listen, to just talk, to give them ride, bring them a book or a drink of tea or just sit with them while they cry. Just be there.  When I heard about Bake It Happen I had to know more, I had to be a part of it. I had to help in some way.  I did not know that we had to bake one of Judy Levin’s recipes when I started this campaign- I baked my mom’s favorite muffins- pumpkin spice and although I did shed a few tears as the scent filled my kitchen the sweet memories that filled my heart made it all worth it. My mom and I shared many  pumpkin spice muffins together. In fact, she IS the reason I ever started my love for the entire pumpkin craze. She loved pumpkin spice back before it was a “thing”. When September and October hit, her house smelled like happiness. Today, my house smelled like happiness. An although it has been ten years since I have heard my mother’s voice and ten years since we have shared a pumpkin spice muffin, today, it was like she was sitting right there beside me.  Thank you “Bake It Happen” for helping with breast cancer and thank you for making me stop and just connect to many many pumpkin spice happy memories.

“Bake It Happen” an innovative fundraising campaign started by two sisters whose mission is to find a cure for Metastatic Breast Cancer (MBC), gains strong momentum and will kick off its fifth year with the help of strategic partners The Cancer Couch Foundation, Taste Buds Kitchen, Sweet Loren’s and Ford Warriors in Pink.  The fundraising effort – which honors the legacy of Judy Levin, a talented baker/cook and mom who sadly lost her battle with Metastatic Breast Cancer – requires only that participants “bake” and “share” photos of Judy’s recipes on social media.  An anonymous donor will donate money for every Bake it Happen photo “shared.” 100% of the funds raised from Bake it Happen will go to directly to The Cancer Couch Foundation to fund Metastatic Breast Cancer Research.

While 41,000 individuals die from MBC each year, little funding for research is allocated to this deadly disease.  As a result, Judy’s daughters, Shari and Stacy have been the driving forces behind a creative fundraising campaign aimed at helping accelerate treatment options for patients battling this most aggressive form of breast cancer. “Even throughout her six year battle with Metastatic Breast Cancer, our mom’s kitchen was a communal table for family, friends and even strangers who embraced the tastes and love emanating from her dishes,” says Shari. Her sister, Stacy adds, “After receiving multiple requests for our mom’s recipes, we realized we could spread Judy’s culinary love  — all in the name of Metastatic Breast Cancer research.”  And so, in 2012, the Bake it Happen campaign was born.

The Bake It Happen campaign was first introduced on Shari’s blog My Judy the Foodie, which has an incredibly loyal following, and is dedicated to her mom and her amazing recipes.  In its first year, the campaign was shared by influential parenting and food bloggers across the country who lent their support and digital influence to the fundraising effort.   Over time, thousands of supporters across the country began to pass on Judy’s culinary legacy and hope for a cure.  After five years, the Bake it Happen campaign achieved its goal: to build the baking campaign into a national fundraising movement where supporters would bake and share Judy’s recipes or donate to the cause.  To date, the Bake it Happen campaign has raised over $60,000 for breast cancer research and this year, Shari and Stacy are determined to raise even more.

This year, Bake It Happen will be donating all of the funds raised by its fundraising efforts to The Cancer Couch Foundation – a non-profit organization founded by Dr. Rebecca Timlin-Scalera (an amazing woman who was initially diagnosed, incorrectly, at Stage 4 and then restaged and currently battling Stage 3c breast cancer). Rebecca is a neuropsychologist who, upon diagnosis, quit her private practice to dedicate ALL of her time to raising as much money as she can to fund metastatic breast cancer research.  The Cancer Couch Foundation, in just the first six  months, raised over $500k for cutting edge metastatic breast cancer research at Dana-Farber Cancer Institute and Memorial Sloan Kettering Cancer Center.  The Cancer Couch Foundation is privately funded allowing 100% of donations and event proceeds to go directly to these carefully chosen research projects to accelerate treatment for MBC. Furthermore, every single dollar is matched and this year they are on track to put 1 million dollars toward this life saving, critical research.

“I will never forget what it felt like to have been initially diagnosed at Stage 4, knowing there is no cure, and I will not leave behind those who are still living with this,” commented Founder Rebecca Timlin-Scalera, PhD (Stage 3c).

Bake it Happen has also formed strategic partnerships with Taste Buds Kitchen. TBK is a Kids Kitchen by  day and a BYOB Adult Kitchen by night offering cooking classes, parties and special events to ages 2-99. With their flagship location in NYC and franchise locations in cities around the country, all locations will offer special Bake It Happen themed classes this October for budding chefs ages 2 to 8 along with a caregiver to make a special recipe from the campaign. All locations have committed to donating a portion of the proceed from those classes to The Cancer Couch Foundation! “We are honored to contribute to the Bake it Happen campaign and support the efforts to find a cure for this terrible disease. Our budding chefs are excited to make a difference,” commented Jessi Brelsford, founder of Taste Buds Kitchen.

Additionally, Ford Warriors in Pink and Sweet Loren’s (amazing, all-natural cookie dough) have joined the campaign as social media partners and will help amplify the message about Bake It Happen via their digital platforms.