Giveaway- Mariah Carey’s All I Want For Christmas Is You Now Available! 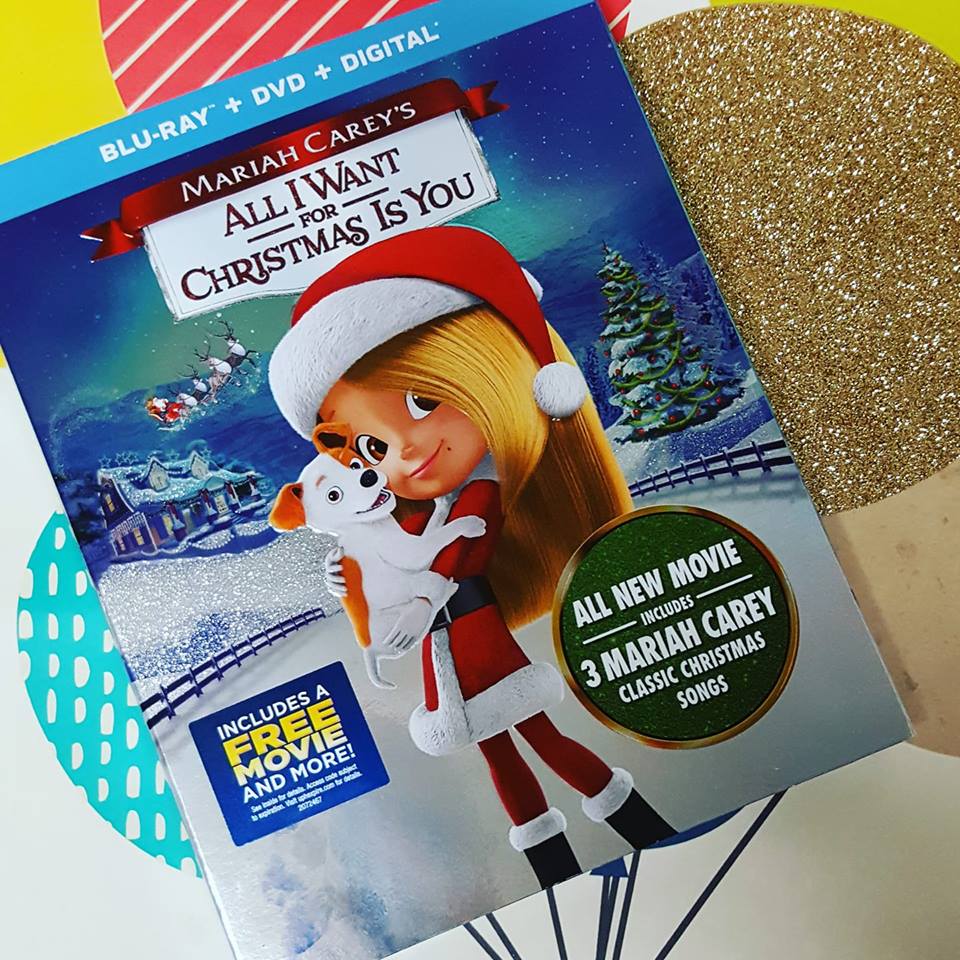 I have been a Mariah Carey fan forever. I just love her. I love her music, her fashion, her voice, just everything! When I heard about Mariah Carey’s All I Want For Christmas Is You, I had to know every detail! Do you love Mariah? Do you love puppies? You MUST see this movie!! Mariah Carey originally released the single “All I Want for Christmas is You” in 1994 and it has sold more than 14 million copies! In 2016, more than two decades later, it was the year’s most streamed holiday single and dominated at #1 on Billboard’s Holiday 100 for four consecutive weeks. Carey’s critically acclaimed picture book of the same name was published in 2015. And now comes the new Holiday film, sure to be an instant classic with kids and parents alike!

The new film Mariah Carey’s All I Want For Christmas Is You is available now on Blu-ray™, DVD, Digital and On Demand from Universal 1440 Entertainment, a production entity of Universal Pictures Home Entertainment. Narrated and executive produced by Mariah Carey, the animated family film follows little Mariah as she chases her dream of having a puppy of her very own, making her ultimate wish for Christmas come true! This new film features an original song written just for the release and also includes 3 of her Christmas Classics!

GIVEAWAY: We are so excited to partner with #AllIWantMovie to offer one lucky 3decades3kids reader a copy of their own! To enter check out the options below. Choose any or all. Good Luck. Winner chosen November 25th at 11:59pm and notified by email the following day. USA/18+only. Winner chosen by random.org.

1. Enter by answering this question below in the comments- Why do you want to win the movie? Did you ever want a puppy for Christmas?

2. Like our FB page and comment/tag someone who would love to win the movie. Click here to go to facebook.com/3decades3kids

3. Like our Intagram page and tag someone who would love to win the movie. Click here to go to Instagram.com/3decades3kids

Disclosure: Complimentary/Giveaway copies provided. All opinions are that of Diane Sullivan and honest. Contact me at 3decades3kids@gmail.com or @3decades3kids across all social media platforms. 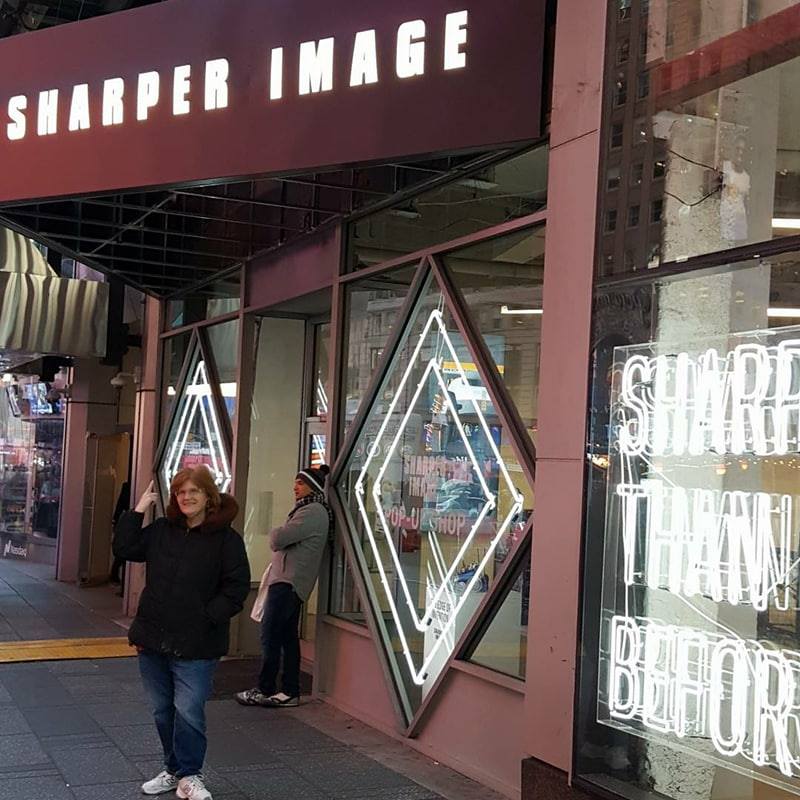 It’s Pop-Up Shop time of the year and I absolutely love it! Everywhere you look there is a pop-up shop but some are pretty much a dream come true. What better way is there to open up a Sharper Image Pop-Up Shop in Times Square, NYC? The holiday shopping season got off to a flying start last night, quite literally, in Times Square where Sean Astin was on hand to officially open a playground-themed Sharper Image pop up shop that invites hands-on, try-before-you-buy fun. As for the flying, Jordan “Jet” Temkin, two-time International Drone League World Champ thrilled the VIP crowd with myriad remote airborne stunts, while New York’s Finest (NYPD) faced off against New York’s Bravest (FDNY) for “best NYC driver” bragging rights on a huge RC car track, complete with hairpin turns and checkered flags. 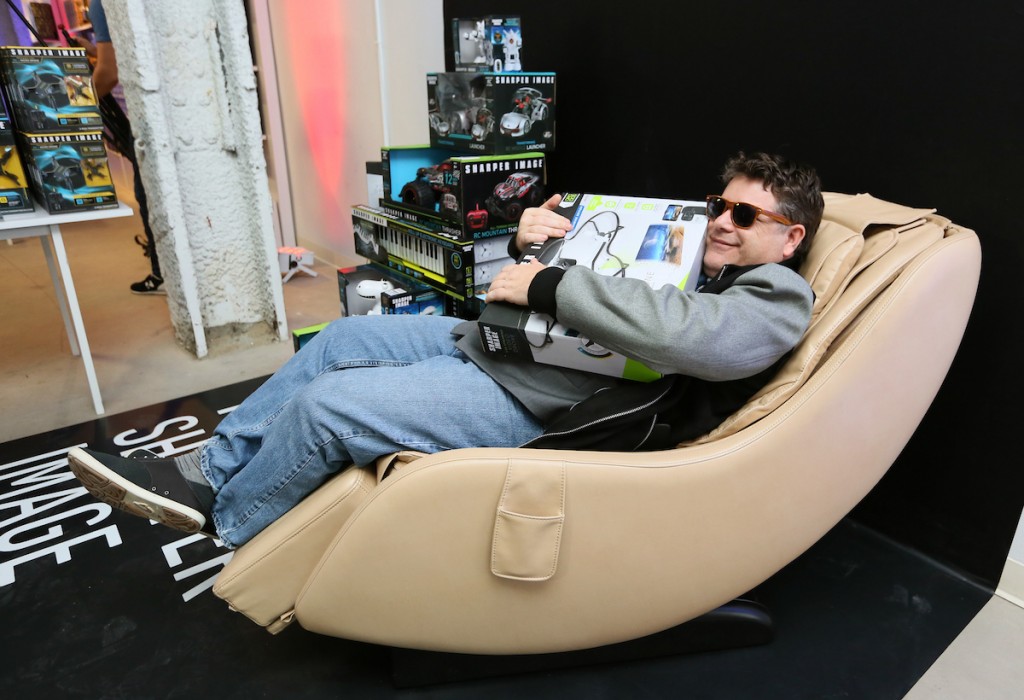 Photo: Actor Sean Astin explores his inner nerd at the Sharper Image® pop-up store in New York’s Times Square, testing the new Sharper Image massage chair, Thursday, Nov. 9, 2017. From drones of all sizes and radio-controlled toys to hi-tech barware and beyond, Sharper Image offers something for everyone in the familyfrom the gadget lover or jet-setter, to the kids or kid-at-heart. (Stuart Ramson/AP Images for Sharper Image)

Pictured above: The New York City Fire and Police Departments and actor Sean Astin race Sharper Image® Radio Controlled Flip Stunt Rally Vehicles at the new pop-up Sharper Image retail location in New York’s Times Square, Thursday, Nov. 9, 2017. This holiday season, Sharper Image is giving consumers a reason to shop sharper by helping them all shop wiser with a thoughtfully-curated selection of premium gifts for play and the home, available at the pop-up and at retail partners across the country. (Stuart Ramson/AP Images for Sharper Image)

The two-story showcase at 4 Times Square returns Sharper Image to brick and mortar retail this holiday season, inviting New Yorkers and visitors from across the country, and around the world, to Shop Sharper by offering a curated selection of premium gifts for play and the home, at prices worth celebrating. It’s high-tech, high-touch, high quality, minus the high price tag.
“I mean, who doesn’t love Sharper Image. Like so many of us here tonight, I grew up with Sharper Image,” said Astin. “Playing with all the awesome stuff in this store takes me back, while showing off everything that Sharper Image is today … 100 percent fun, and right in the heart of Times Square.” Click here for everything Sharper Image: www.sharperimage.com 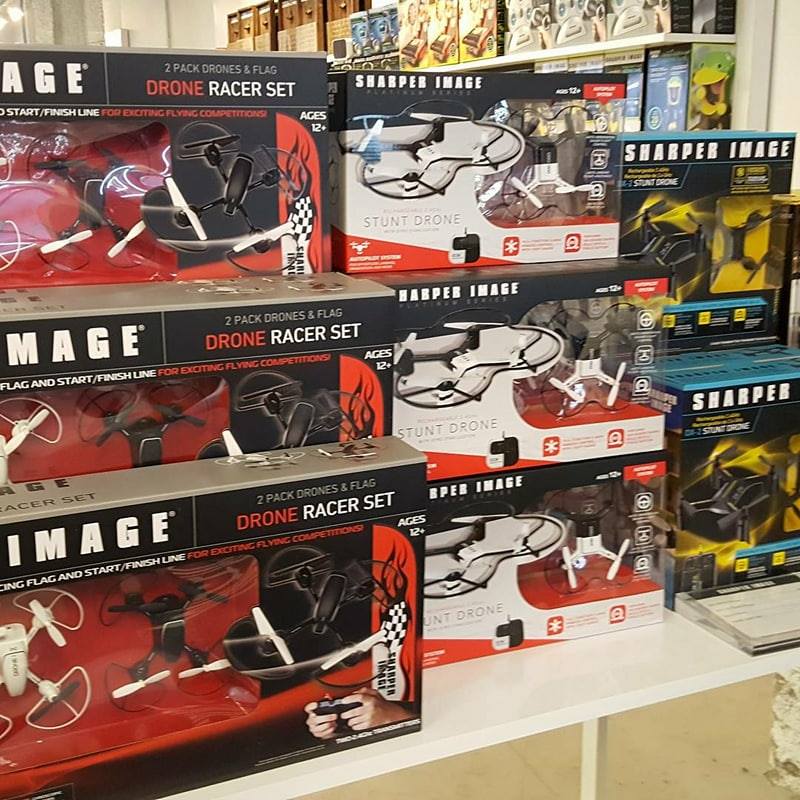 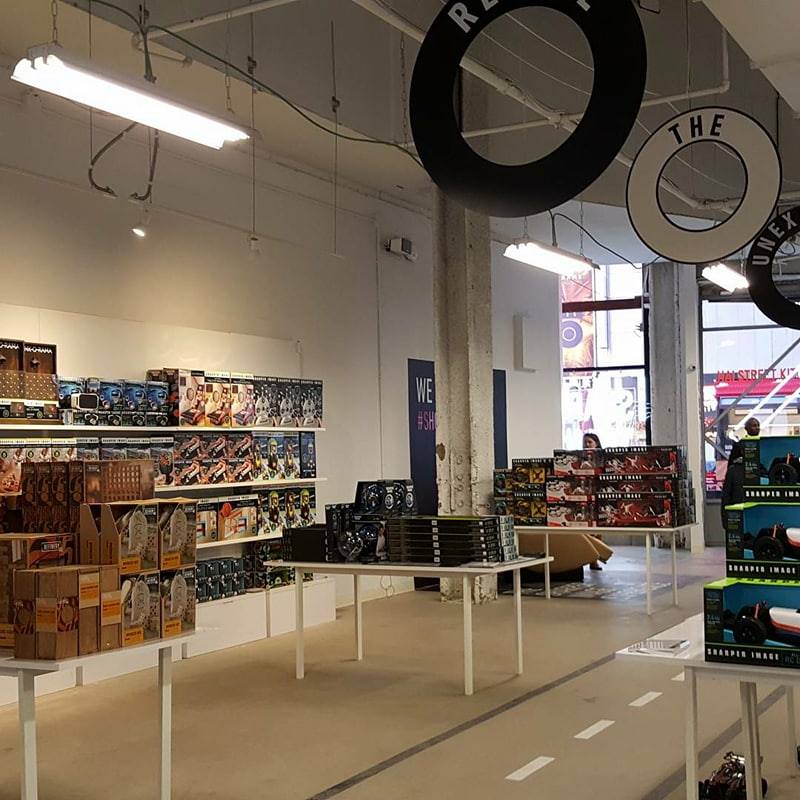 “The Times Square community couldn’t be happier to have Sharper Image with us this holiday season,” said Tim Tomkins, President, Times Square Alliance. “Like Times Square itself, their seasonal store is about many things at once, and not least among those, the intersection of fun and commerce. We invite New Yorkers, and visitors from across the country, and all throughout the world, to experience it for themselves.” 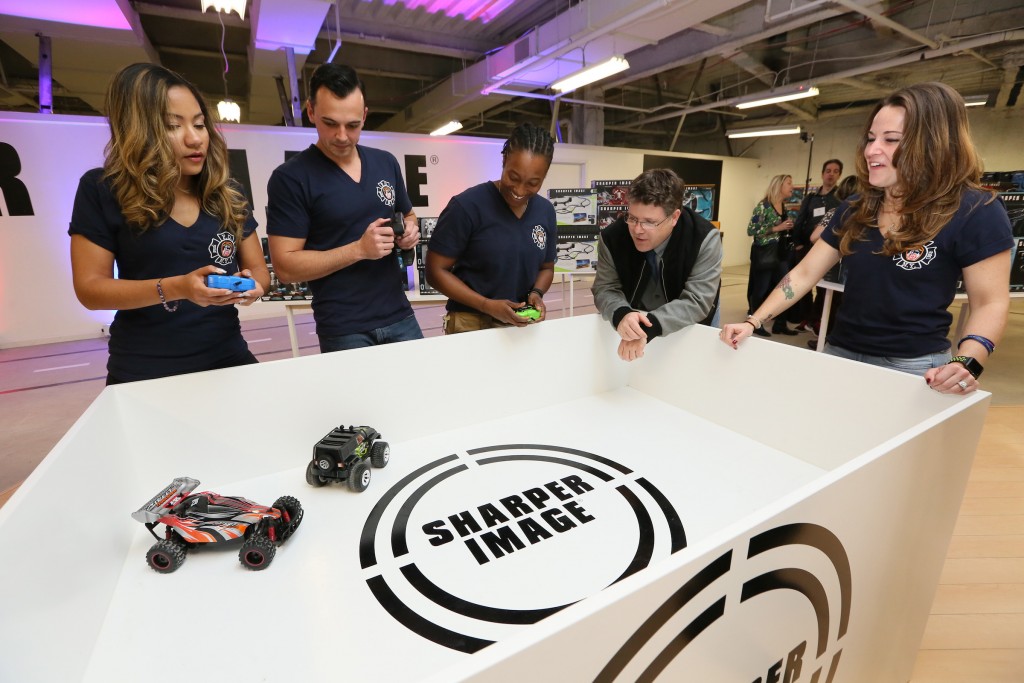 Photo: Actor Sean Astin, second from right, looks on as New York City’s Bravest from the New York Fire Department test Sharper Image® radio-controlled cars at the launch party for the 4 Times Square Sharper Image holiday pop-up store, New York, Thursday, Nov. 9, 2017. For those unable to make the trip to Times Square, fear not: items featured in the pop-up can be found nationwide at major retailers such as Target, Bed Bath & Beyond, Kohl’s and others. (Stuart Ramson/AP Images for Sharper Image)

For those who can’t make it to 42nd and Broadway, items featured at the Sharper Image pop-up can be found nationwide at major retailers such as Target, Kohl’s and Bed Bath & Beyond. Among Sharper Image items sure to delight this holiday season, and well beyond: 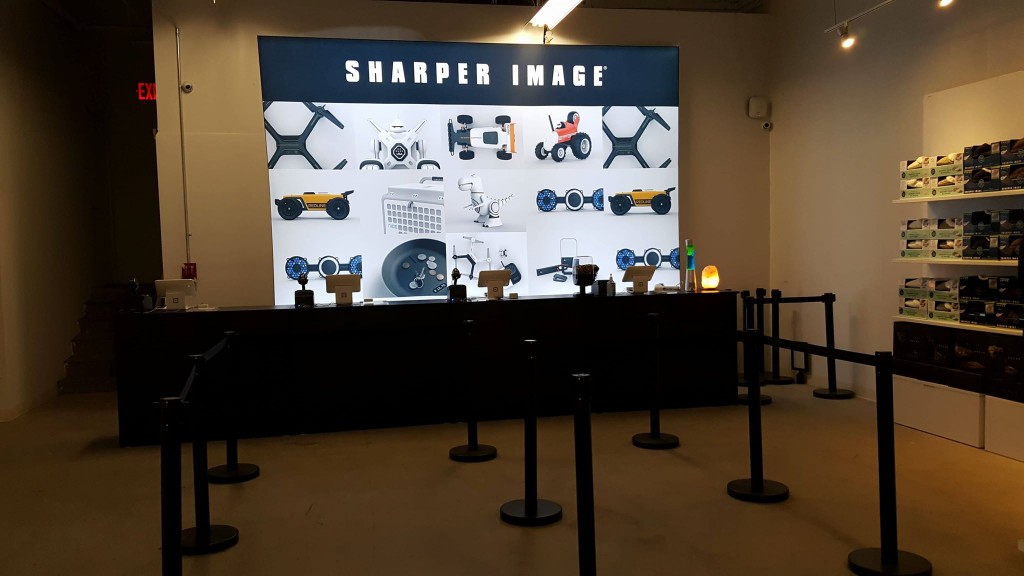 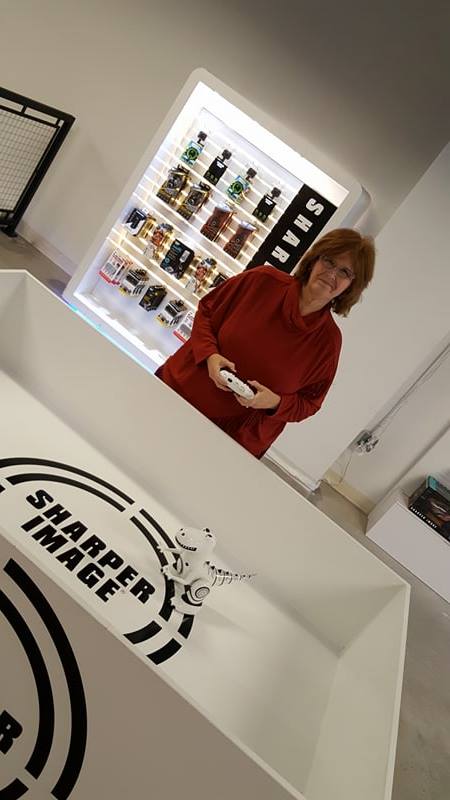 “Sharper Image was in so many ways the original experiential store, and our holiday pop-up takes the idea of hands-on fun at retail to an entirely new level,” said David Conn, Chief Executive Officer at Sharper Image brand owner ‎ThreeSixty Group. “Our holiday selection, available here and at leading retailers like Target, Bed Bath & Beyond and Kohl’s, showcases what Sharper Image is all about today, and that’s having fun!”

Disclosure: Diane Sullivan/3decades3kids was invited to the media launch of the Sharper Image Pop-Up Shop NYC. All opinions are that of Diane and do not represent those of the parent company represented. Contact me at 3decades3kids@gmail.com or @3decades3kids across social media platforms.