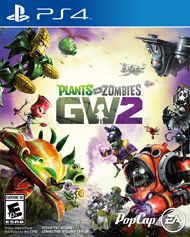 Recently my family had the chance to check out Plants vs. Zombies: Garden Warfare 2. Total thumbs up from this gamer family! From youngest to oldest, we loved it! I have a feeling there will be many hours, many fun times ahead! Plants vs. Zombies: Garden Warfare 2 is an incredible game that brings the crazy cartoon world of the Plants vs Zombies franchise to the multiplayer shooter genre. The game expands on the ideas of the outstanding first game, offering new classes to play as with awesome abilities. These new classes can call in giant robotic mech that can attack foes for a short time. There are also new gamemodes in Garden Warfare 2, and these modes separate the series from the many multiplayer shooters that are out there. The game truly stands out as a unique experience unlike any other. Plants Vs. Zombies: Garden Warfare 2 proves that the multiplayer franchise is here to stay, and it is better than ever.

Overall, Plants vs. Zombies: Garden Warfare 2 is a unique multiplayer experience with a wide variety of awesome gamemodes, new weapons, and new classes! The game takes the ideas of the first entry and reworks and expands on them to perfection. The game also includes an all-new single player mode, which can be played from the perspective of the Plants or the Zombies! There is also an extremely open map where players can explore. The single player also serves as a great way to get the hang of things before diving into the frantic and fun multiplayer action.

The game also looks absolutely stunning on the Xbox One system. running at 60 frames per second. The environments are all extremely detailed, and the game meets the graphical standard set by EA’s other titles like the Battlefield franchise and the stunning Star Wars: Battlefront! Garden Warfare 2 is a very fulfilling sequel, offering more of the content we all love as gamers while also bringing loads of new content to the franchise! In Plants vs Zombies: Garden Warfare 2,there is something for everyone. I absolutely love the game, and I can’t wait to see where the franchise goes in the future. Check out everything Plants vs. Zombies: Garden of Warfare 2 here and purchase one for yourself if it looks like your kind of game.

GIVEAWAY: Great news! I’m thrilled to say that Plants vs. Zombies: Garden Warfare 2 is offering two lucky 3decades3kids readers each their own PS4 download code. Please enter on the rafflecopter below. Giveaway ends Saturday at 11:59pm. Winner will be contacted via email and have 24 hours to respond and claim prize. Prize delivery will be via email with a PS4 Code. 18+/usa. Thank you and Good luck.
a Rafflecopter giveaway

Disclosure: Diane Sullivan/3decades3kids is a PVZGW2 partner blog. We are a Gamer Family! No compensation was given for this post. An XboxOne preview and full code were issued to us in order to facilitate this review. This post is part of our #GamerFamily series.  Contact me at Diane@3decades3kids.net and @3decades3kids everywhere else.