Blue Sky Entertainment’s Epic tells the story of teenager Mary Katherine (or M.K., as she claims to go by), who goes off to live with her father at the edge of the woods after her mother passes away. Her father, estranged because of his obsession with the advanced race of tiny people he believes live in the forest, seems  crazy to M.K. at first, but soon she finds herself swept up into the world of those same people– the leaf men, sworn to protect the forest from the decay spread by the evil bogguns.


Following a series of magical events in the world of the leaf men, M.K. becomes not only shrunk to the size of these mysterious creatures, but also the chief protector of the sprout that holds the key to the life of the forest. If she, her new leaf-man friends Nod and Ronin, and the slug and snail duo Mub and Grub cannot protect the bulb until it blooms, then the forest will fall into the decay-laden hands of the evil boggun leader, Mandrake. Will M.K. and her friends be able to protect the life and growth of the forest from falling into Mandrake’s hands? The battle is on in Blue Sky’s Epic.

Epic is based on a book by William Joyce, entitled The Leaf Men and the Brave Good Bugs. Joyce,  who has been author and illustrator to over fifty children’s books, wrote The Leaf Men and the Brave Good Bugs in 1996, and is also known for his other works Rolie Polie Olie, George Shrinks, and the Guardians of Childhood series, which was adapted earlier this year into the film Rise of the Guardians. Joyce has earned many awards for his creations, and Epic certainly fits in with such esteemed company!

In addition to excellent source material, the film boasts a stellar voice cast, including a diverse group of actors and actresses such as Amanda Seyfried, Josh Hutcherson, Colin Farrell, Aziz Ansari, Chris O’Dowd, Jason Sudeikis, and Christoph Waltz, and even some familiar faces from the music world, like Steven Tyler, Beyonce, and Pitbull. Pitbull in particular gives quite the performance as the dirty-dealing toad Bufo, a “businessman” who fixes races, calls shots, and aids the evil Mandrake in his plot to spread decay throughout the forest. 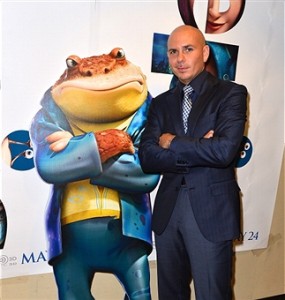 Epic is a summer must for families, 3D enthusiasts, and all who enjoy a good story! Its breathtaking look at miniature landscapes will catch your eye, its clever humor will tickle your funny bone, and its themes of valuing nature and family will touch your heart. Be sure to see Epic in theaters now! Special thanks to The Moms for this amazing event with EPIC and Pitbull. Guest post by Louis Sullivan.