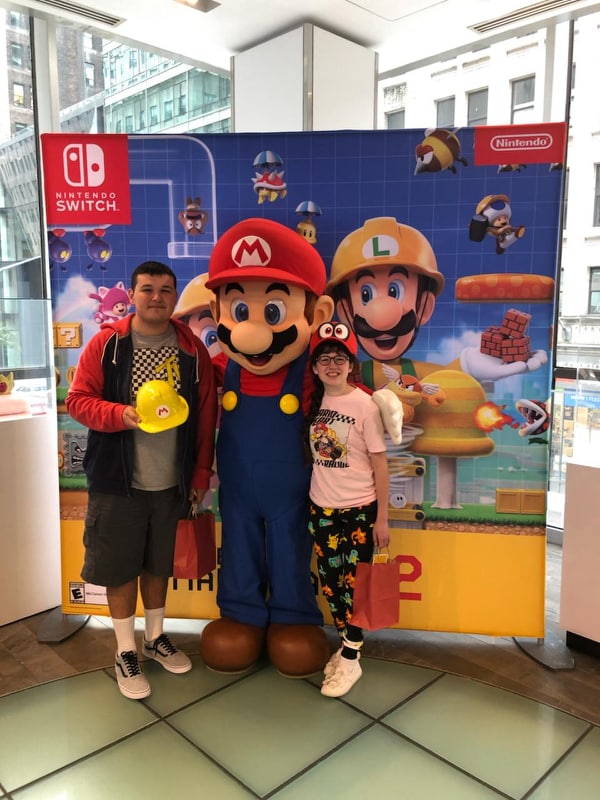 Everyone around the NYC area is gearing up for back to school. Every store you walk into has school supplies from ceiling to floor. But for us, back to school means we are hanging out with Mario at the Nintendo Store NYC and talking Nintendo Switch games and family fun. 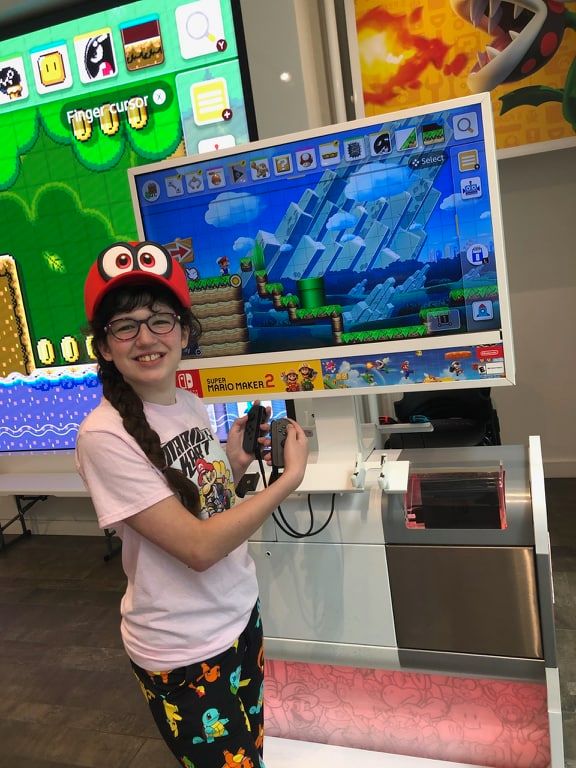 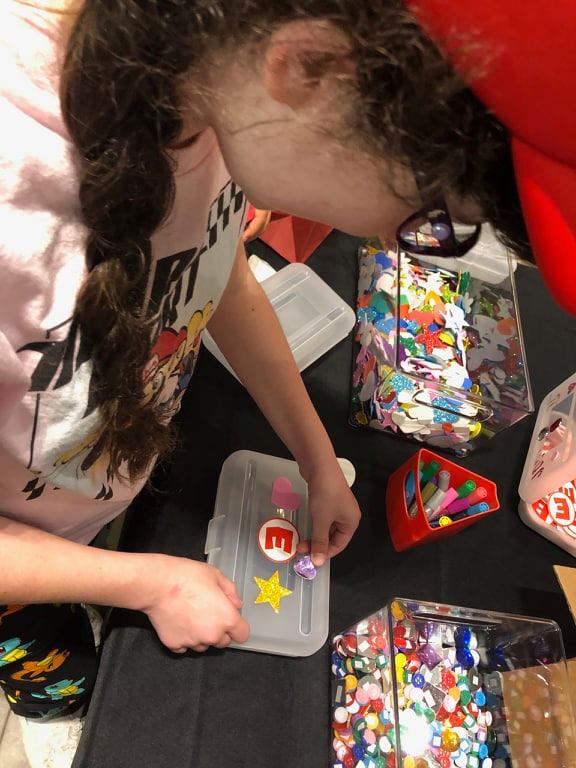 Recently our family was invited to a private event at Nintendo Store NYC where we were treated to a morning of fun that would make any gamer smile from ear to ear! Super Mario Maker 2 for Nintendo Switch was the game of day and we were taught about the Nintendo Switch app where parents can set Parental Limits on their children’s game time. You can set it up to shut off  the Switch at a certain time, set it for game time of an hour or two or even use it as a reward system when school begins! Sounds good to me, Mario! We are definitely going to test it out around here. 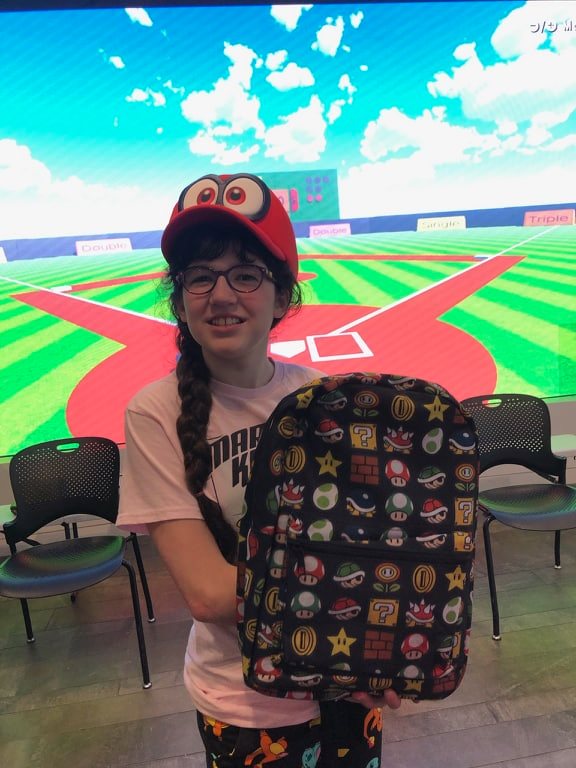 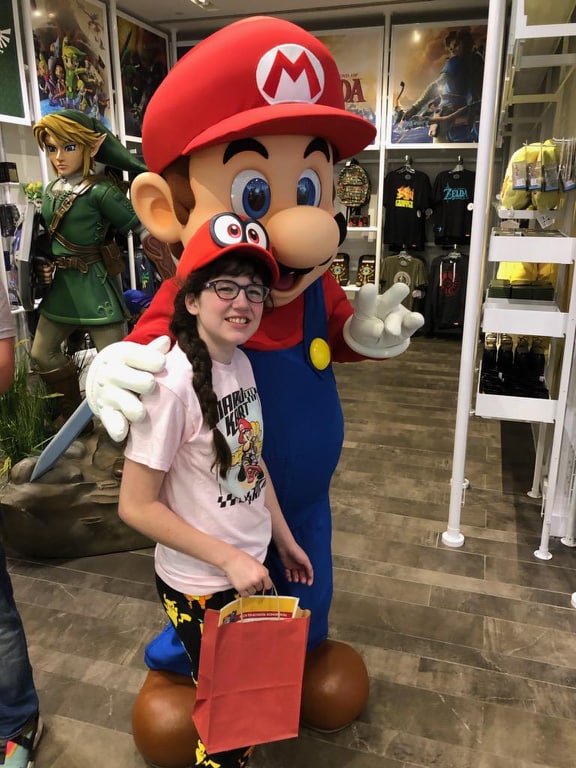 As for the kids, they were more concerned with some awesome Nintendo DIY pencil box crafts and of course gaming! Emm and Adam were among the gamers who spent their morning watching demos on the big screen and sampling gameplay on monitors. What a great morning. I mean, what could be better than gaming with Mario in the house!?! In addition everyone left a little better prepared for the school year with a brand new Nintendo themed backpack filled with goodies! Thank you Nintendo. GAME ON!! To find out more and all things Nintendo Click Here!

Disclosure: Media Event and take home swag provided by Nintendo. All opinions are that of Diane Sullivan. The presented views do not reflect those of the parent company represented in this blog post. Contact me at 3decades3kids@gmail.com or @3decades3kids across all social media networks. 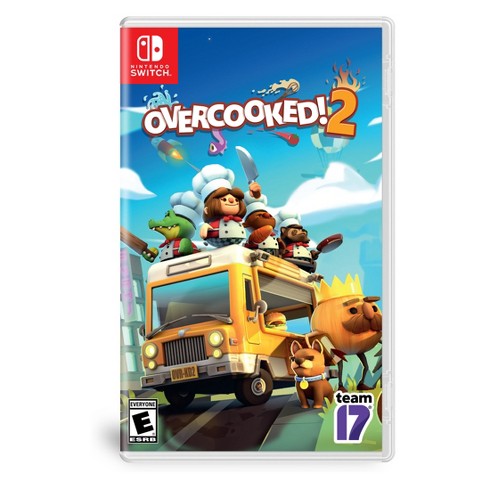 Recently our family had the chance to check out Overcooked!2 for Nintendo Switch. We already are obsessed with Overcooked! so we could not wait to see if the second one lived up! This gamer family gave it a big thumbs up within the first fifteen minutes of play. If you are looking for a great game, rated E for everyone, you can look no farther.

With it’s fast gameplay and adorable cast of characters, Overcooked 2 makes for an enjoyable experience that the whole family can take part in. With up to four players either locally or online, the cooking action never ends as players whip up a variety of food orders across a selection of different kitchens! In Overcooked 2, players are found once again in the Onion Kingdom with new ways to cook, and even crazier gaming scenarios than before. The game features an entertaining story that is sure to keep the family laughing throughout.

Upon watching the opening cutscene, the audience is introduced to the Necro-NomNom-Icon, which holds the secret to “everlasting culinary greatness.” However, when the book is used, the Unbread rise from their resting place, creating a new trouble in the land. The game’s setup is pretty straightforward and similar to the first in the series, but it has enough new content to keep players engaged. New foods and settings have been added to the game, changing up the formula for play. Additional game mechanics can be found in Overcooked 2 that were absent from the original, specifically the ability to throw dishes across surfaces. Now with this functionality in the game, it’s become much easier to slide orders between players and complete orders even faster than before. The original Overcooked was a couch co-op experience that was nothing short of outstanding, and the sequel works even harder to build on what already made for such an enjoyable experience.

Each mission in Overcooked 2 operates on a timer where players must complete a given amount of orders before the clock runs out in the bottom right of the screen. The game’s art style is interesting, and emphasizes the fast-paced movement of the game. The characters will waddle around between counters while making orders in a rush, carrying large stacks of plates in their arms. Overcooked 2’s set pieces are also something not worth overlooking, as the environments look beautiful and fit the overall tone of the experience. The wacky characters must run between platforms that often move, complicating tasks and adding another challenge into the tasks, to complete orders. Portals, conveyor belts, and full kitchen pieces shift around and vary gameplay, keeping the experience from ever feeling the same.

The game has a giant emphasis on co-operative play. All 40+ levels can be completed either solo, where one player controls multiple chefs, or in multiplayer where the family can take on different roles in the process. The addition of online multiplayer in the game also adds a lot of replay value, as the experience is not just limited to couch co-op play. Overcooked 2 works hard to create a unique experience with an extreme attention for teamwork gameplay, and it is most definitely a stand-out multiplayer game for the Nintendo Switch. In Overcooked 2, there is always some new challenge to face, and always a ton of co-operative fun to be had, either online or with your friends at home! Check out more about Overcooked!2 here: https://www.nintendo.com/games/detail/overcooked-2-switch

Disclosure: This post is part of our #HolidayGiftGuide as well as our #GamerFamily series. All opinions are that of Diane Sullivan and do not reflect the views of the parent company represented. Sample product provided. Contact me at Diane@3decades3kids.net for collabs or @3decades3kids across all social media networks! Game On! 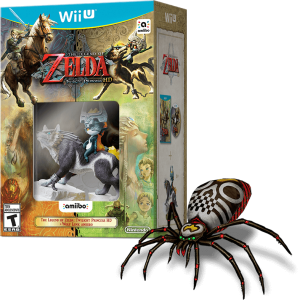 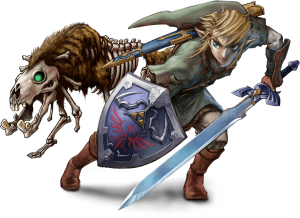 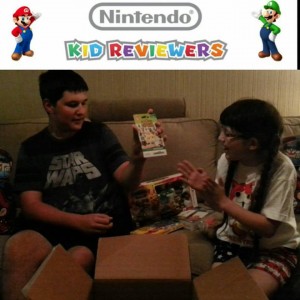 Disclosure: Diane Sullivan/3decades3kids is a Nintendo Partner. Emily and Adam Sullivan are Official Nintendo Kid Reviewers. Follow our gaming series for all of the latest on everything Nintendo. Contact me at Diane@3decades3kids.net and @3decades3kids everywhere else across the social media platform. 3decades3kids.net 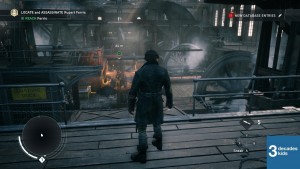 Assassin’s Creed: Syndicate is the most incredible installment in the franchise yet. Featuring two playable protagonists, an interesting story, and unrivaled gameplay, this game is a must-have for fans of the series. Within the first hour of playing the game, I found myself infiltrating and sneaking my way through buildings, fighting enemies, and even getting into a brawl on top of a train. Syndicate features extremely tense and heart-pounding action sequences. 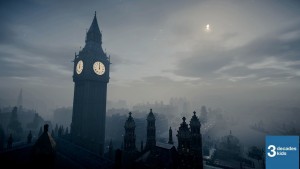 A great new gameplay addition to the series is the Rope Launcher, which offers a new way to travel around the massive world that Ubisoft has created. The game’s world is very impressive. With many buildings to enter and people flooding the streets, Syndicate has the best scenery the series has seen so far. London is the perfect location for an Assassin’s Creed game, with its iconic locations and unique environments. It is very entertaining to explore the sprawling open world, and see all that is has to offer. Another great new gameplay addition is the ability to ride in a horse-in-carriage as you travel around London. This provides for new unique missions, and intense chases. It offers another way to travel through London’s streets, and sometimes offers a faster form of transportation for players. 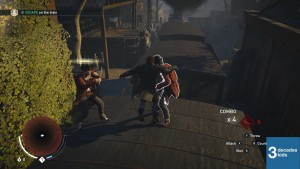 Syndicate has also improved the series’ freerunning system, making one button dedicated to ascending and the other dedicated to descending. This gives players more control over where they want to travel in the environment. The latest installment in the franchise also improves combat, and makes it even more cinematic than it was before. With new finishing moves, and a reworked hand-to-hand combat system, it has never felt better to get in an all-out brawl in an Assassin’s Creed title.

Nintendo Animal Crossing Amiibo Festival! This post is part of our #NintendoKidReviewers series and written by Emily Sullivan-age 9. Emily is an official game reviewer for Nintendo America. 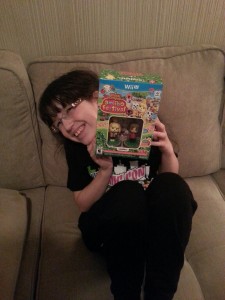 I received Nintendo Animal Crossing Amiibo Festival a few weeks ago and could not wait to play it! The game is 1-4 players with fun minigames!In the game the object is to collect happy points and bells.On each corner of the game board village you will get a corner of the stamp when you get all four corners of the stamp you will get a happy point bonus!You choose the month you will be playing in and will earn emotions and different outfits on the amiibos you use.There are eight different Animal Crossing Amiibos to use in the game.There are Amiibos of, Isabelle, K.K.Slider, Mabel, Tom Nook, Digby, Lottie, Reese, and Cyrus. If you have enough Happy Tickets you can open fun attractions. 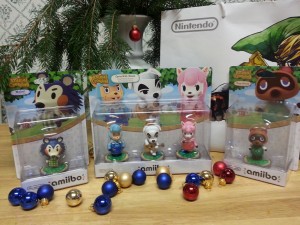 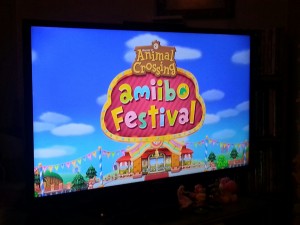 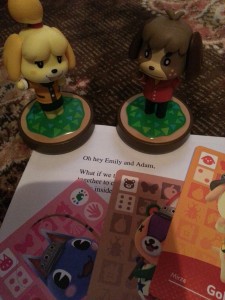 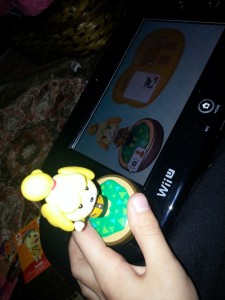 Amiibo Cards are like Amiibos, they can be used in different games, for different things. In Animal Crossing Amiibo Festival the Amiibo Cards can be used to play the attraction minigames. At the beginning of  the game the host or hostess will ask if everyone playing knows how to play the game, if you say no the host or hostess will explain the rules to the player or players. During the game watch out for purple spaces which are the bad spaces and pink spaces are good spaces, while Special Event spaces are usually green with a picture of the event they are for.Every Sunday Joan the turnip seller comes and you can choose to buy or not to buy the turnips. There is also twice dice day when you roll two dice instead of one! A fortune teller named Katrina that comes around with tarot cards on special event spaces.Redd the fox who sells special cards to you and the other players comes around sometimes too!Srunk comes to give you cards! You can use the card you earn from a mini-game or buy for 100 bells. You can carry two cards at one time. In the middle of the game there might be a bug off or a fishing tourney,during them you will land on a green, silver, or gold space. At the end of the game the host or hostess will announce who is in first, second, third, and fourth place.  My favorite part of the game is collecting all the Happy Points with the Amiibo characters! Check out more about Animal Crossing Amiibo Festival here.

Disclosure: This review was written by Emily Sullivan, age 9. Emily is an official Nintendo Kid Reviewer for Nintendo America. Emily hopes that this review helps your children to understand the game! This post is part of the #NintendoKidReviewers series. No compensation was given for this post. Samples products are sent to the house in order for the kids to review them. Contact me at Diane@3decades3kids.net and @3decades3kids everywhere else.