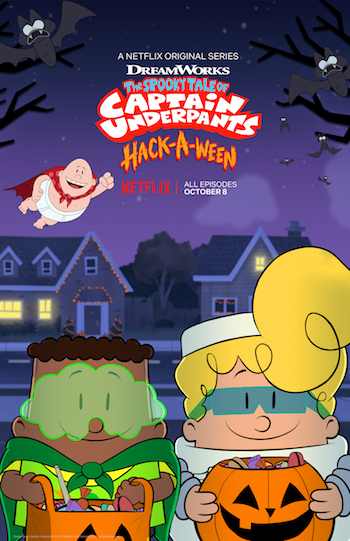 When mean Principal Krupp and evil boy-genius Melvin make Halloween illegal and institute “Hall-no-Ween,” George and Harold team up with their friends to hack their favorite holiday, creating Hack-A-Ween. The kids wear disguises instead of costumes, carve cabbages instead of pumpkins, and get snacks instead of candy. The hacked holiday is a huge hit, so when Krupp and Melvin make even more trouble, the kids realize that in order to really save Halloween they will have to negotiate with the enemy.

Check out the SPOOK-tacular new clips from the Halloween special below!

DreamWorks The Spooky Tale of Captain Underpants: Hack-A-Ween is now available to watch exclusively on Netflix!

Tra-La-Laaaaaaa! It’s time to make your very own Captain Underpants pumpkin! Perfect for Halloween, download the instructions now at http://bit.ly/CaptainUnderpantsHackaweenPumpkin THE SPOOKY TALE OF CAPTAIN UNDERPANTS: HACK-A-WEEN is on Netflix right now!

Disclosure: Post is written by Diane Sullivan. All opinions are honest and do not reflect the views of the parent company represented. Netflix partner. Contact me at Diane@3decades3kids.net or @3decades3kids across all social media networks.