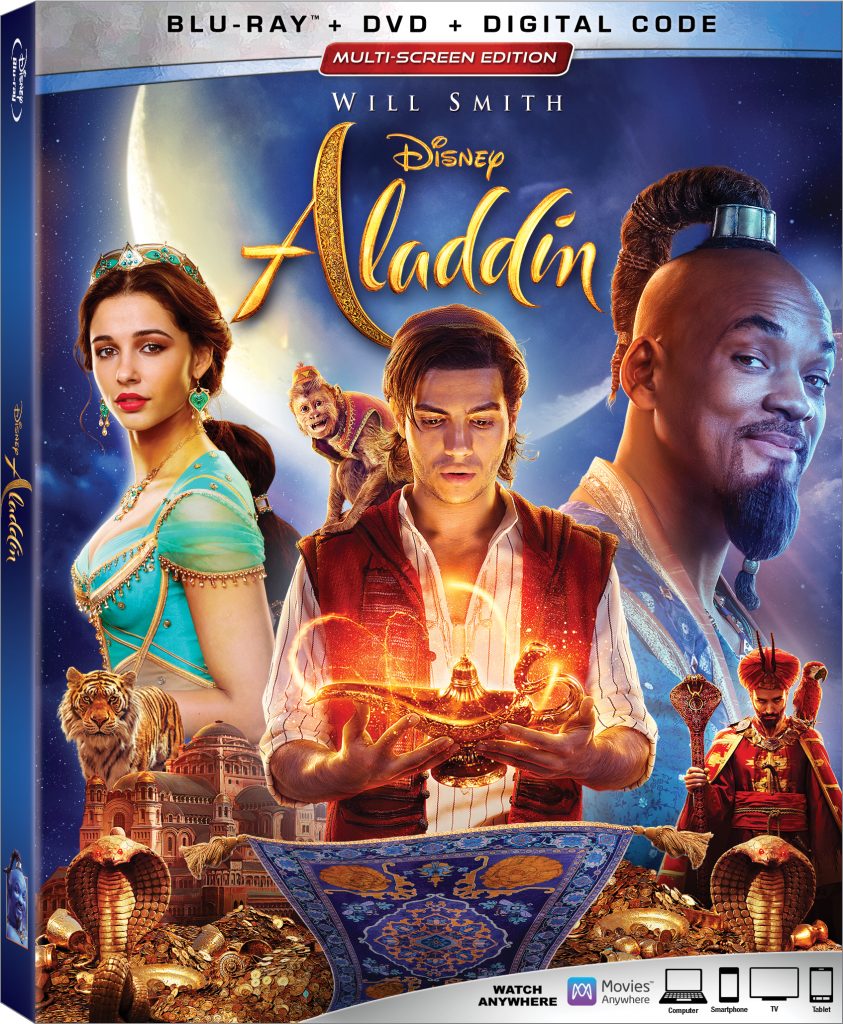 If there is one Disney movie I absolutely love it is Disney’s Aladdin! When I heard it was going to be made into a Live Action movie I kind of just shrugged it off and figured it would never live up to the original animated Aladdin. I was SO wrong! Our family of five packed into the theater opening night with a handful of doubts, yet we had to see it on the big screen. As soon as the movie began I knew I was completely off the mark and that it was going to be incredible. I can say with all honesty that I loved the live action Aladdin movie. It lived up for me in every single way. So now that it’s heading to the blu ray release there is only one thing to do, we will be watching Aladdin again and again! The live action as well as the original animated are both up there in my top Disney movies. Thanks for getting this one right, Disney! 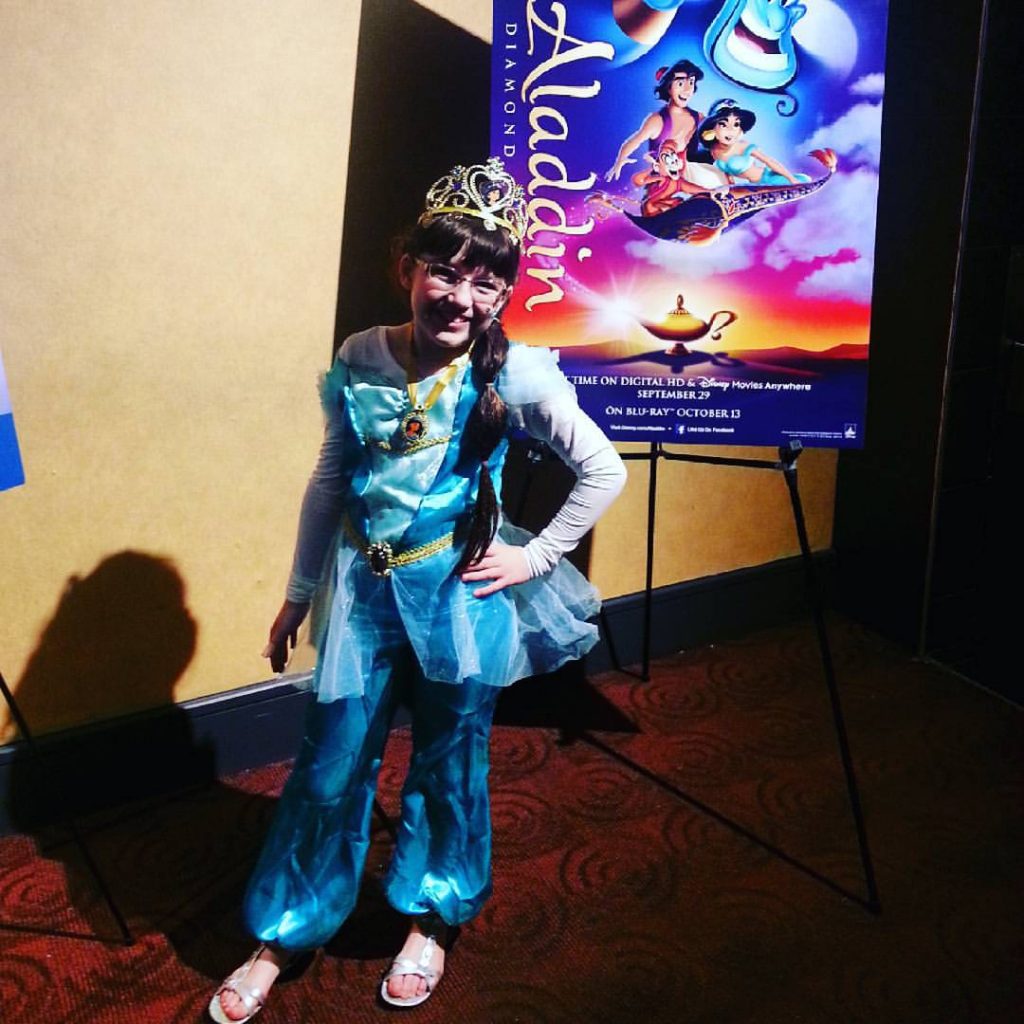 So here is the great news! Now you can own BOTH movies on bluray! They will both release on September 10th, 2019. We have partnered with Disney Pictures to have one lucky winner win BOTH the Live and Animated version! Enter on the rafflecopter below. Giveaway ends September 10th at 11:59pm. Winner contacted soonafter. (USA/18+). 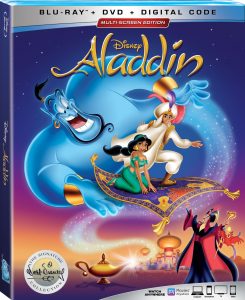 In 4K for the First Time, The Animated Classic “Aladdin” Joins the Walt Disney Signature Collection on Digital, 4K Ultra HD™ and Movies Anywhere now and on 4K Ultra HD™ and Blu-ray™ Sept. 10

Embark on a magic carpet ride with the entire family when Disney’s original animated classic “Aladdin” soars into the highly celebrated Walt Disney Signature Collection, granting nonstop laughs, action-packed adventure and Academy Award®–winning music (1992: Best Music, Original Song, “A Whole New World,” Original Score) for the first time in 4K Ultra HD™. The Signature Collection Edition of “Aladdin” takes flight two weeks early in 4K Ultra HD™, Digital in HD and Movies Anywhere now and lands on 4K Ultra HD™ and Blu-ray™ Sept. 10 — with a brand-new sing-along version; all-new bonus features, including original cast recordings; and classic bonus material. The arrival coincides with the in-home release of 2019’s live-action film adaptation “Aladdin,” granting fans everywhere the opportunity to own both magical movies.  The Signature Collection Edition invites every member of the family to join Genie, Aladdin and Jasmine to belt out the unforgettable songs from “Aladdin” — such as “A Whole New World,” “Friend Like Me” and “Prince Ali” — through a new sing-along version. Other fresh features include a walk down memory lane with Scott Weinger (speaking voice of Aladdin) as he reflects on his personal journey portraying the diamond in the rough and meeting with the original cast and filmmakers, and one jump into the recording booth during the original recording sessions. Digital exclusive features legendary animator Eric Goldberg reminiscing about drawing Genie. Also included are hours of classic bonus gems, from hilarious outtakes with the legendary Robin Williams (voice of Genie) to an in-depth discussion with directors John Musker and Ron Clements.

Disney’s tale of the lovable “street rat,” Aladdin, self determined Princess Jasmine and the all-powerful Genie has remained a family favorite for over a quarter of a century. It all began with the animated classic “Aladdin,” the highest-grossing film of 1992 and a two-time Academy Award®–winner, and continued with the hit Broadway musical “Aladdin” and 2019’s live-action film adaptation “Aladdin,” directed by Guy Ritchie and starring Will Smith as Genie, Mena Massoud as Aladdin and Naomi Scott as Jasmine.  Families can decide how, when and where they wish to enjoy “Aladdin” in their households. The film arrives two weeks early on Digital 4K Ultra HD and HD with an exclusive extra — and a Digital bundle doubles the fun with both the Walt Disney Signature Collection Edition and this year’s thrilling, live-action adventure “Aladdin.” A physical copy of the film will be released as a 4K Ultra HD™ (4K Ultra HD™, Blu-ray™, and Digital Code) and a Multi-Screen Edition (Blu-ray™ and Digital Code).

*Bonus features may vary by retailer

Rating: G in U.S. and Canada 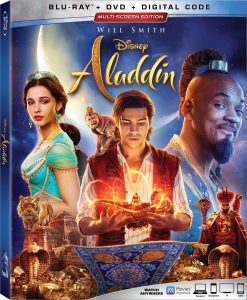 Experience the Magic in a Whole New Way

Extras illuminate a whole new world behind the scenes of “Aladdin,” including on-set visits with Will Smith, Naomi Scott, Mena Massoud and Guy Ritchie, a deleted song, deleted scenes and side-splitting bloopers

Disney’s “Aladdin,” the thrilling and vibrant live-action adaptation of the studio’s animated classic, lands in homes on Digital in HD, 4K Ultra HD™ and Movies Anywhere on now and physically on 4K Ultra HD, Blu-ray™ and DVD on Sept. 10. Fans of all ages will enjoy the exciting, humorous tale of the lovable “street rat,” Aladdin (Mena Massoud), courageous and self-determined Princess Jasmine (Naomi Scott) and the larger-than-life Genie (Will Smith) with all-new bonus features. The release of the live-action adventure coincides with the addition of the original animated classic to the highly celebrated Walt Disney Signature Collection  — granting “Aladdin” fans everywhere the opportunity to own both magical movies. Extras explore elements of “Aladdin” that audiences adore, from the film’s treasured, iconic award-winning music to its beloved characters and their hilarious antics on and off screen. Viewers get the first look at an all-new song “Desert Moon,” deleted from the final film, written by eight-time Academy Award® winning composer Alan Menken and Oscar®-and Tony Award®-winning songwriters Benj Pasek and Justin Paul (“The Greatest Showman,” “La La Land”). Features document Guy Ritchie’s joyful, easy-going approach to directing that led to movie magic; Will Smith’s fresh take on the infamous shape-shifting blue entity confined to an oil lamp; Naomi Scott’s powerful performance as the spirited princess who yearns to lead the people of Agrabah; and the indescribable feeling of playing Aladdin chronicled personally by Mena Massoud. Deleted scenes and a blooper reel round out the fun.

In addition, early owners of “Aladdin” gain access to exclusive bonus features. Fans who pre-purchase will receive a feature showcasing the making of the massive musical number “Prince Ali,” and those who bring home the film first on Digital will secure an exclusive extra detailing the creation of Jasmine’s new song “Speechless.”  “Aladdin” is sure to become an instant classic for viewers of all ages and will be packaged several ways to ensure the entire family gets the most out of its in-home entertainment experience. The film arrives two weeks early on Digital 4K Ultra HD and HD. A Digital bundle, which includes both the Walt Disney Signature Collection edition of the original animated classic “Aladdin” and the live-action adaptation, is also available for early purchase. A physical copy of the film will be released as a 4K Ultimate Collector’s Edition (4K Ultra HD, Blu-ray, and Digital Code), a Multi-Screen Edition (Blu-ray and Digital Code) and a single DVD.

Disclosure: Sample/Giveaway copies provided by Disney Pictures. Special thanks to Disney’s Aladdin. All opinions are that of Diane Sullivan and do not reflect the views of parent company represented in this post. Contact me at 3decades3kid@gmail.com and @3decades3kids across all social media networks.