Nancy Drew and the Hidden Staircase 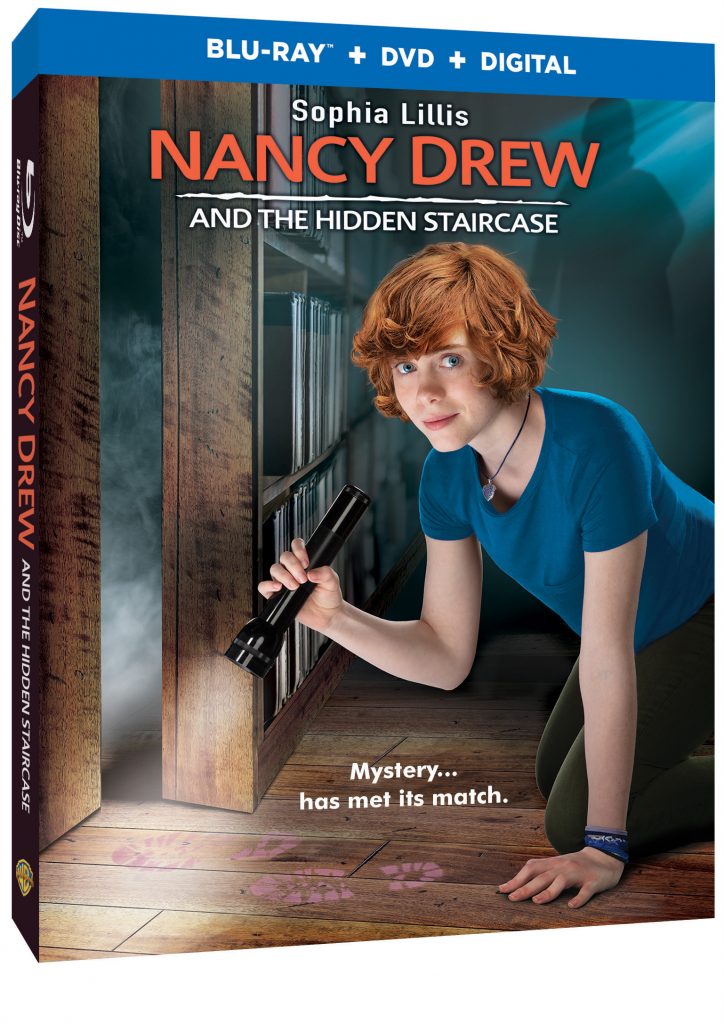 **Warner Bros. Home Entertainment provided me with a free copy of the Blu-ray I reviewed on this blog post. The opinions I share are my own.**

Nancy Drew and the Hidden Staircase is now on bluray/dvd/digital! We watched it on the big screen and loved it!

• Welcome to the Interactive Nancy Drew Escape Room – to escape, you must solve riddles and find items to uncover the three numbers needed to open to door. Good Luck!

• In the Mystery Match Video Puzzle, use your mouse to click + drag puzzle pieces to unlock clips from the film.

Uncover the Mystery When Nancy Drew And The Hidden Staircase
Arrives from Warner Bros. Home Entertainment on
Digital March 26, 2019 and on
Blu-ray™ Combo Pack & DVD on April 2, 2019

Recently I had the chance to chat with Sophia Lillis via phone and it was quite enjoyable! I asked her about the one part of the movie with the pig man. She said it scared her more than the clown she has worked with in past. I found Sophia to be a delightful teen who is very in touch with herself and the world around her. She spoke about her views on bullying and how she never personally had been bullied but did (although she said it would be in another world) thought that getting even with the bully in the movie was SO much fun! I asked Sophia who her role model was in the industry. I never expected her answer- Bill Murray! What a great role model. She told me all about how she enjoys comedies and would love to be in one in the future!

Based on the Bestselling Book!  The iconic mystery solving teenager from the classic Nancy Drew books is back with an all-new feature length film that will keep you guessing until the very end! Warner Bros. Home Entertainment will release Nancy Drew And The Hidden Staircase on Digital starting March 26, 2019 and Blu-ray™ Combo Pack & DVD on April 2, 2019. Executive Produced by Ellen DeGeneres, the film stars Sophia Lillis (IT and “Sharp Objects”), Sam Trammell (“True Blood” and “This is Us”), and Linda Lavin (“The Good Wife” and“Alice”) and follows Nancy Drew in her new town, making new friends and on a mission to solve the case! The film carries a suggested retail price of $19.99 for the Digital, $19.98 for the DVD and $28.98 for the Blu-ray Combo Pack.

After the death of his wife, Carson Drew decides to leave Chicago behind and make a fresh start with his daughter in River Heights. But for 16-year-old Nancy Drew, life in a small town is mighty dull. She longs for excitement, adventure, and the chance to make a difference. Nancy gets that opportunity when she is asked to help solve the ghostly activity at the Twin Elms mansion. Can she help explain the creaking footsteps, exploding lightbulbs and the ominous creature? Is it the handiwork of high-school bully Derek Barnes? Or is it possible that the ghost of original owner Malcolm Colfax is back for revenge? Recruiting her best friends George and Bess, along with local “mean girl” Helen, Nancy Drew is on the case!

GIVEAWAY: Enter by leaving a comment that you want to win the Nancy Drew and the Hidden Staircase on our FB page. Please be sure to like our page! https://www.facebook.com/3decades3kids/

Winner chosen via random.org on April 15th at 11:59pm. Winner has 24 hours to respond and claim prize before a new winner is chosen. (18+/USA)

Disclosure: All opinions are that of Diane Sullivan and do not reflect the views of the parent company represented. Media/Giveaway  provided by  Warner Bros Home Entertainment. Contact me at 3decades3kids@gmail.com or @3decades3kids across all social media networks.