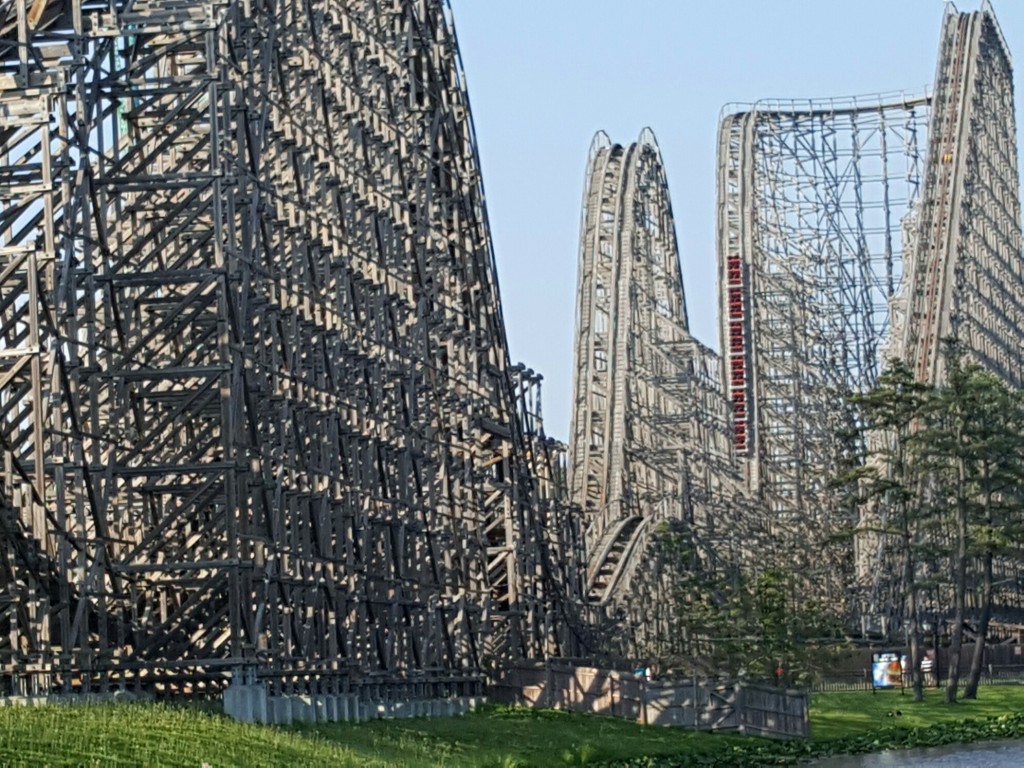 Believe it or not Spring Break is here! Somehow the winter is over and the nice weather is upon us. That can only mean one thing, Six Flags Great Adventure is opening for Spring Break and we are completely ready to go! Yep, it’s Go Time at Six Flags, are you ready? 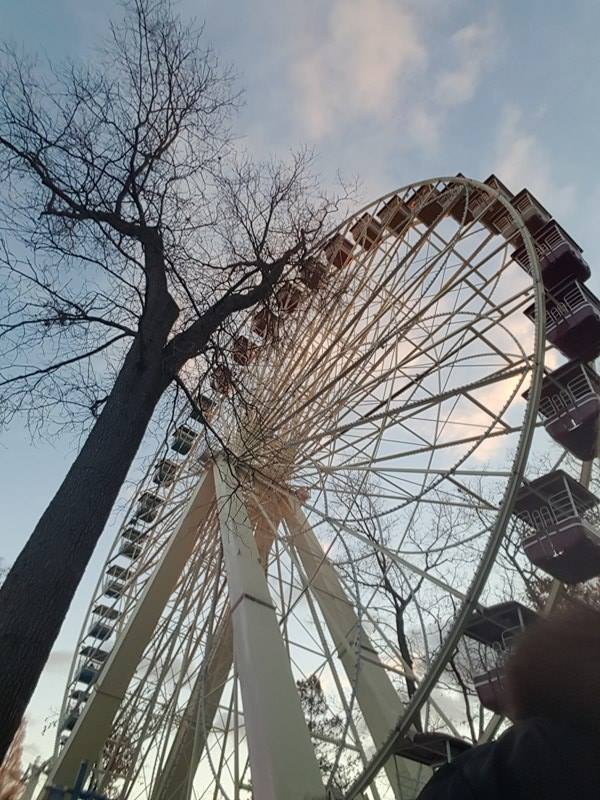 You can visit Metropolis to catch a glimpse of the park’s record-breaking, new ride, WONDER WOMAN Lasso of Truth, opening in late May. Towering a staggering 17 stories tall, this jaw-dropping, spinning disk will reach speeds up to 75 miles-per-hour as it spins and swings to breathtaking heights. Our family is counting down the days! 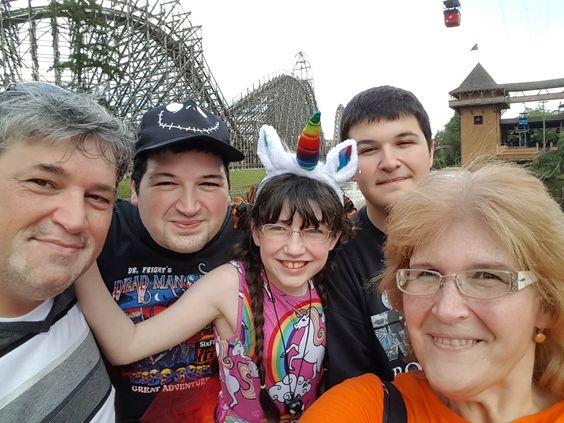 Scouts BSA, Cub Scouts, Explorers, and families can participate in the 25th annual Scouts BSA Camporee. All scouts will receive limited-edition patches for attending. This one-of-a-kind camporee will begin with a cyber security presentation inside Showcase Theater at 9:30 a.m. Those who attend the presentation will have the opportunity to be first in-line for JUSTICE LEAGUE: Battle for Metropolis and CYBORG Cyber Spin at 10:15 a.m. Following this event, students will be able to work with counselors in the park for Fingerprinting and Crime Prevention Merit Badges until 12:30 p.m. Scouts will also have access to the Fire and EMS Staff for a question and answer session.

Disclosure: All opinions are that of Diane Sullivan and are honest. They do not reflect the views of the parent company represented in this post. 3decades3kids is a Six Flags Great Adventure Partner Blog. We will be giving you an up to date info as the season unfolds at Six Flags, so stay tuned. Contact us for collabs at Diane@3decades3kids.net or @3decades3kids across all social media networks. Thank you Six Flags. 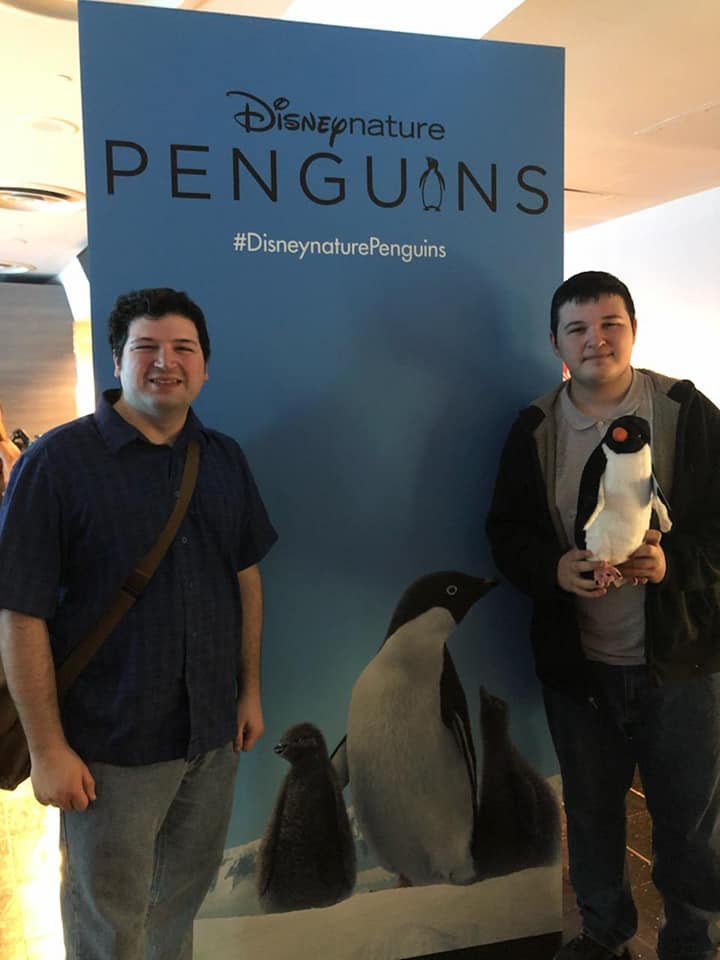 Disneynature’s Penguins is a comedic and heartfelt story that showcases the importance of family and the natural world. It is the tenth film under the Disneynature branding, and it focuses on a lovable and charismatic penguin named Steve. Steve is an Adélie penguin, and the audience watches along through his journey from a young adult to a father figure in his own right. The film is narrated by Ed Helms, as he breathes even more personality into the Adélie penguins the audience sees throughout the film. While narrating the movie, Helms also slips into the character of Steve and narrates alongside his antics, adding some jokes and keeping the film moving in an extremely light-hearted way. Disneynature films have a way of bringing a certain educational value to the table, while keeping the movie itself rooted in what audiences come to expect from traditional film.

Penguins looks absolutely stunning, as it’s the first Disneynature movie shot for IMAX theaters. Wide shots of the Antarctic showcases hundreds upon thousands of penguins on the screen, and it truly is a sight to see in such a major way. From the countless Adélie penguins to the massive killer whales which make a brief appearance in the film’s runtime, Penguins is definitely a movie not to miss seeing in this format. The IMAX experience along with some incredible shots in the movie really encapsulate the below-zero temperatures, and submerges audiences into the depths of the arctic waters as well. Shooting in such a high quality format, our family was completely immersed when watching the penguins traverse extreme amounts of icy terrain, dive in and out of the water for fish, and encounter the dangers of the antarctic. From it’s largest shots of the world itself to the smallest details of a penguin egg hatching on camera, Penguins sets itself apart as a unique, enjoyable, and highly detailed experience for all ages. 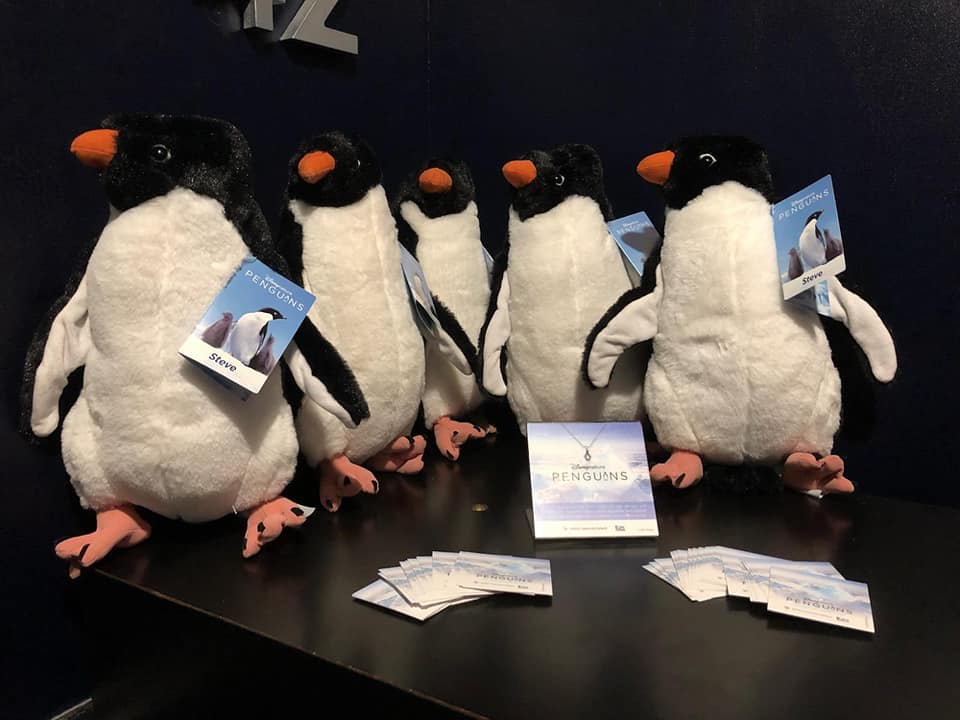 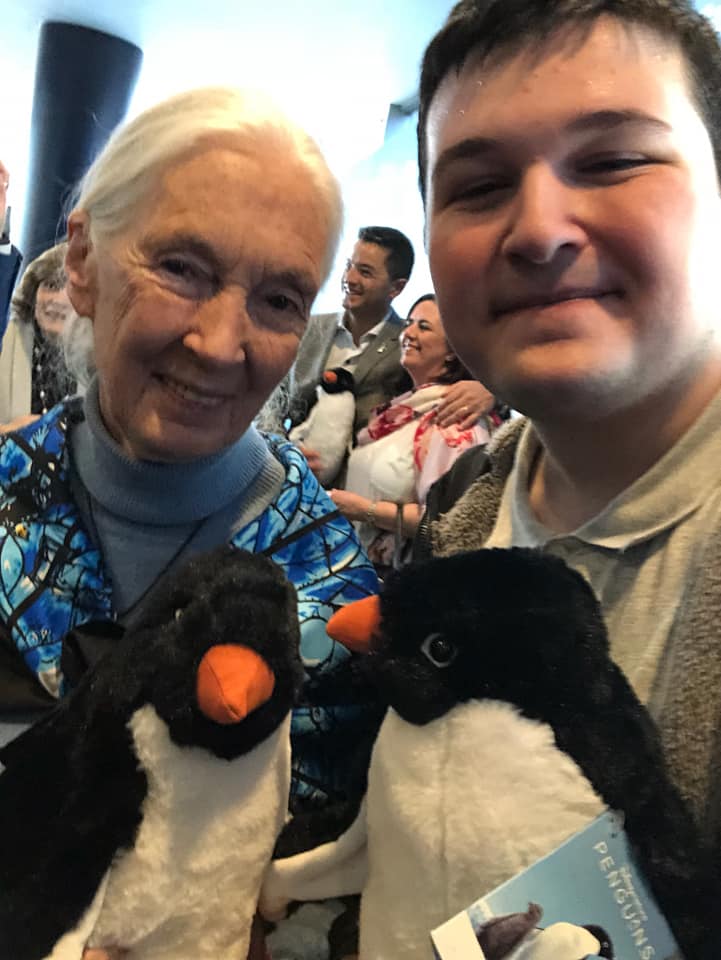 The film’s journey explains the process of how penguins live in a new and original way. From showcasing a scene where penguins find their mates to an rock and roll song from the 1980’s to giving Steve a voice through the narrator, Penguins offers something unique that audiences won’t find in other films or television documentaries. There’s a sense of personality to every scene in the movie, and it works hard to keep families engaged and on the edge of their seats. From it’s most tense moments nearing the end of the film to its most heartfelt, Penguins is one of the most enjoyable films of the year so far. 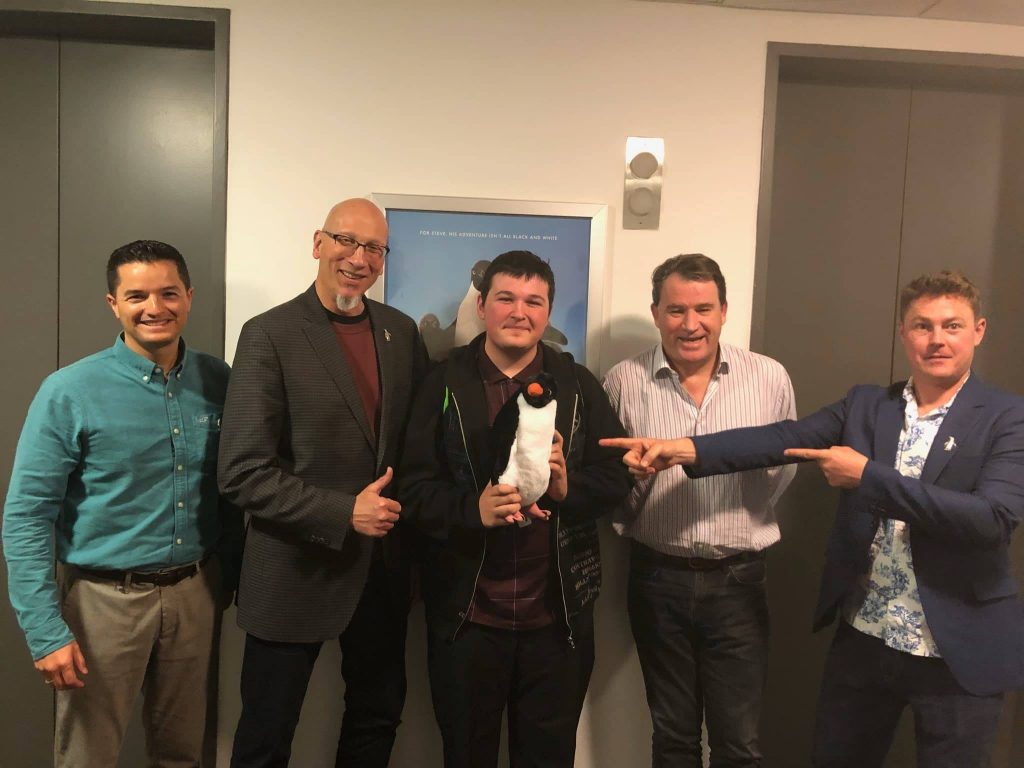 After seeing the film, we had the chance to speak with some of the filmmakers involved with making Disneynature’s Penguins the incredible experience it truly is. We spoke to Alastair Fothergill and Jeff Wilson, the film’s directors, along with producer Roy Conli and Popi Borboroglu of the Global Penguin Society to figure out just how the movie became a reality.

To start things off, I asked the filmmakers how they decided to create a story out of the footage they collected throughout the course of three years.

Alastair Fothergill (Director): “I think one of the things about Disneynature that really stands out from the TV documentaries that Jeff and I work on is that story is everything. People come to the cinema and they expect a narrative. And, we worked on penguins a lot in the past and that’s why we knew that Adélie penguins were gonna be great, and we also knew it was going to be a male story. Because, male penguins have a big role in bringing up their chicks. And, that’s not true of many male animals, who don’t play so much of a part in the process.

Jeff and I wrote a script which would be a traditional movie script, you know, 30-40 pages long with input from Roy, and we knew we had a very strong seasonal story. These are birds where their lives are totally dominated by the coming and going of the ice..We knew the seasonal narrative would be the strongest narrative, but we did film it over three seasons, because it’s a very very very hard place to work.”

Fothergill referred to the script as a “jigsaw narrative,” but said the filmmakers always had an idea of the journey that they were going on.

Alastair Fothergill (Director): “But nature will always throw surprises, and that’s what’s so fun about making Disneynature movies. You go with a big script, the animals never read the script, nature always throws us some curveballs, and our job is to make sure in the end that there is a strong narrative. And, nature has the best stories. As directors, our job is to craft that from everything we film.

Roy Conli (Producer): “I think it’s important to recognize — we call these ‘true life adventures.’ And, it really is in the spirit of Walt Disney and what he was doing between 1948 and 1960. I have a legacy now with Disney for about 26 years…and to be able to help craft these stories is really a true honor. And, it is in the spirit of opening hearts and minds.” 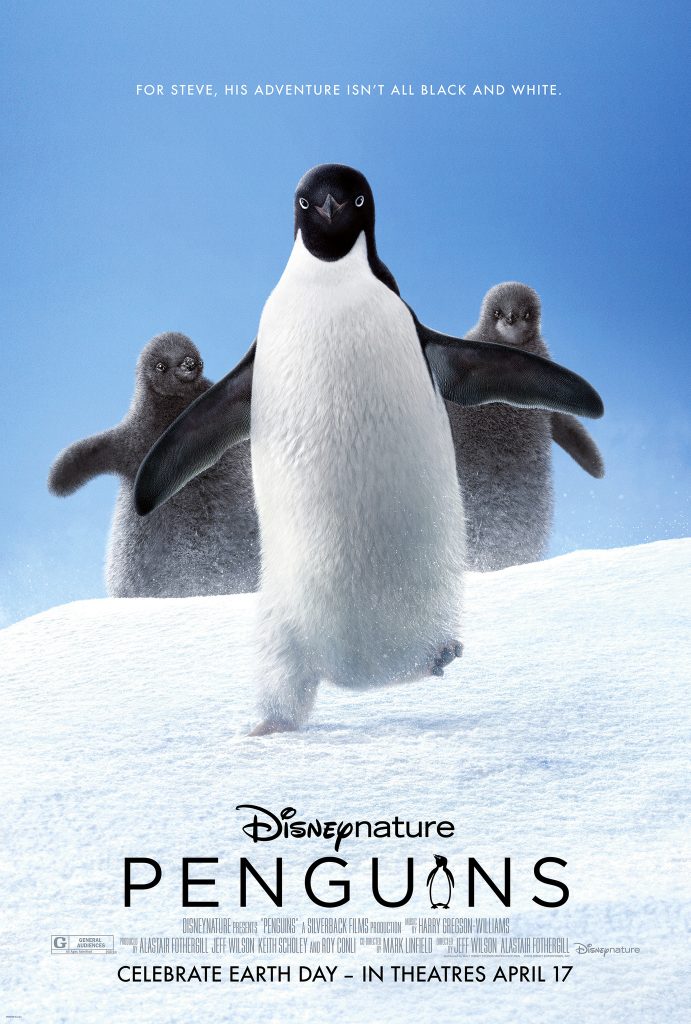 When discussing the character of Steve and selecting Ed Helms for the role of narrator and bringing a voice to the character, Conli went on to describe how he was the perfect fit for the role.

Roy Conli (Producer): “He has an amazing unassuming quality. And, if there’s a quality to Steve it’s that he’s unassuming. I always say it’s like Ed is kind of like the every-man and Steve is like the every-penguin.”

Roy also went on to discuss how things change when working on films, and how theme is the central element in which plot follows.

Roy Conli (Producer): “Theme could be consistent, and plot could change a little bit. If there’s something and it throws you a curve you go with it. And, you restructure a sequence and it makes it better.”

The directors went on to talk about how there were terabytes upon terabytes of footage filmed for the movie, speaking in data terms. Finally, I asked the filmmakers if there were any moments from the footage that really stuck out to them that they knew had to make it into the final cut of the film. Immediately, director Jeff Wilson had a scene that came to mind.

Jeff Wilson (Director): “Puking penguin! Puking penguin had to be in the movie. Like, there was no way that we were gonna let that pass. As a father, I knew that my three boys would see that and go ‘That was awesome, dad.’ You know, there was a penguin on the screen and he was vomiting his guts up, and you can’t let that pass.”

Alastair Fothergill (Director): “For me, it was the close-up shot when Steve sees Adeline and he realizes he may find a mate after all. There’s such a look of ‘Oh, God. Maybe!’ and his disappointment when the other girls went past first. I love all those close-ups.”

Finally, the team discussed how the name “Steve” was chosen for the main penguin in the film. Wilson made note of the fact that he was the only character with a name, and that the children in his family weren’t named in the film, because it kept the focus on the central element of the movie, which was the male Adélie penguin. The name was chosen because it was simple, and relatable on a level as he referred to the name “Steve” being associated with being goofy or clumsy in the U.K. The filmmakers wanted to keep the focus on Steve himself, and let audiences experience the world around him through the eyes of the penguin. 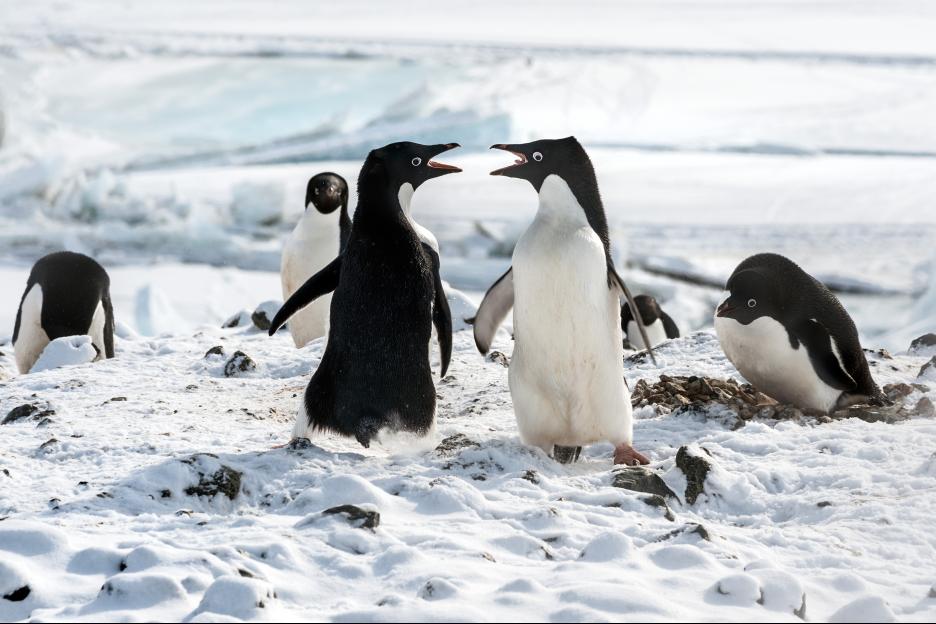 Overall, it was an incredible experience getting to learn more about what goes into the process of creating these amazing films from Disneynature. From the hard work and dedication that goes into filming a single shot, to editing together hours upon hours of footage, to making sure that the movie has the right movement and heart that people have come to expect in the cinema. Disneynature’s Penguins is a cut above other nature documentaries, and a movie full of comedy and heart in its own right.  https://nature.disney.com/penguins

Disclosure: All opinions are that of Diane Sullivan and do not reflect the views of the parent company represented. Media invite extended for NYC Premiere and Round table interviews. Special thanks to Disneynature Penguins for everything. Contact me at Diane@3decades3kids.net or @3decades3kids across all social media networks for collabs. See you at the movies!