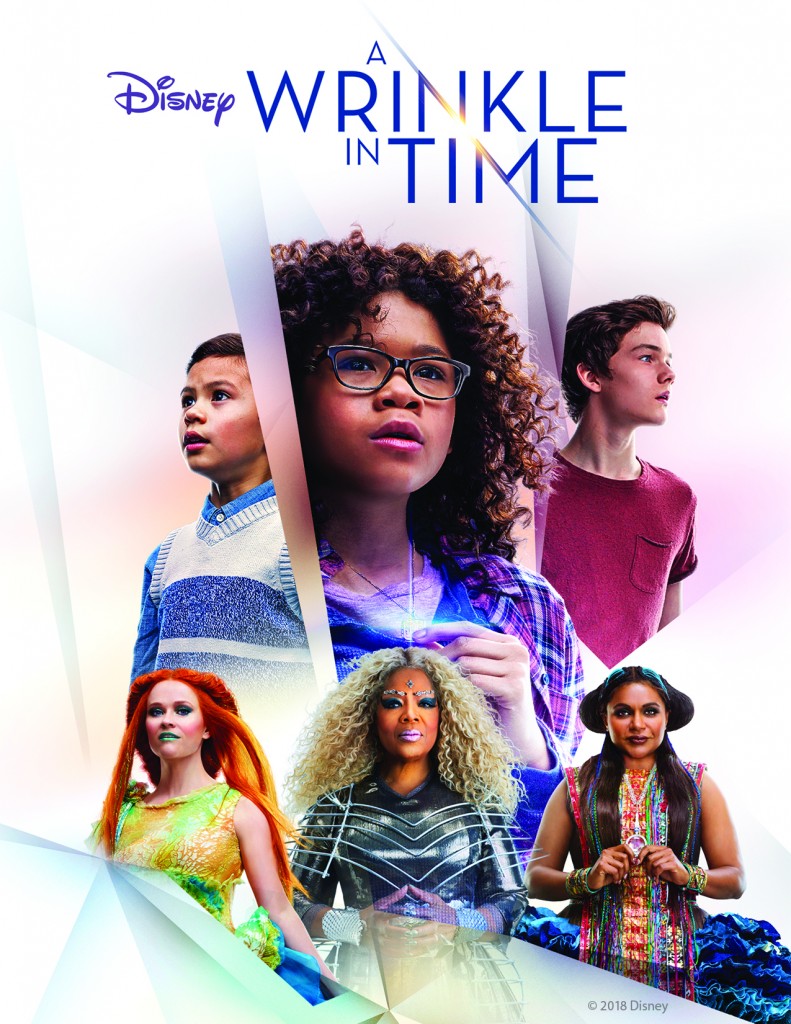 Have you seen Disney’s A Wrinkle In Time? If you have not, you need to very soon! If you have then you already know the wonder this movie is filled with and the magic within. Our family has loved the book forever and we love the movie, too! I cannot wait to see it on our own tv over and over again.
From visionary director Ava DuVernay comes Disney’s “A Wrinkle in Time,” an epic adventure based on Madeleine L’Engle’s timeless classic which takes audiences across dimensions of time and space,  examining the nature of darkness versus light and, ultimately, the triumph of love. Through one girl’s transformative journey led by three celestial guides, we discover that strength comes from embracing one’s individuality and that the best way to triumph over fear is to travel by one’s own light.
Meg Murry is a typical middle school student struggling with issues of self-worth who just wants to fit in. The daughter of two world-renowned physicists, she is intelligent and uniquely gifted, as is Meg’s younger brother, Charles Wallace, but she has yet to realize it for herself. Complicating matters is the mysterious disappearance of Mr. Murry, which has left Meg devastated and her mother broken-hearted. Charles Wallace introduces Meg and her fellow classmate Calvin to three celestial beings (Mrs. Which, Mrs. Whatsit and Mrs. Who) who have journeyed to Earth to help search for their father, and together they embark on their formidable quest. Travelling via a wrinkling of time and space known as tessering, they are transported to worlds beyond their imagination where they must confront a powerful evil force. To make it back home to Earth, Meg must face the darkness within herself in order to harness the strength necessary to defeat the darkness rapidly enveloping the Universe.
Directed by Oscar® nominee Ava DuVernay from a screenplay by Oscar winner Jennifer Lee based upon the beloved novel by Madeleine L’Engle, “A Wrinkle in Time” stars: two-time Academy Award® nominee
Oprah Winfrey as Mrs. Which, Oscar winner Reese Witherspoon as Mrs. Whatsit, Emmy® nominee Mindy Kaling as Mrs. Who, Gugu Mbatha-Raw as Mrs. Murry, Michael Peňa as Red and introducing Storm Reid as Meg Murry, with two-time Emmy winner Zach Galifianakis as The Happy Medium and Emmy nominee Chris Pine as Mr. Murry.
Produced by Jim Whitaker and Catherine Hand with Doug Merrifield and Adam Borba serving as executive producers, the film also boasts an impressive creative team featuring some of the most talented and skilled craft persons working today, including: Tobias Schliessler, ASC as director of photography, Naomi Shohan as production designer, Oscar®-nominee Spencer Averick as film editor, two-time Academy Award®-nominee Paco Delgado as costume designer with music by Ramin Djawadi.
You can purchase a copy of your own here: https://movies.disney.com/a-wrinkle-in-time
Giveaway: Win a Disney Wrinkle In Time Digital HD Code by entering our giveaway. Giveaway ends Sunday June 10 at 11: 59 pm. Enter by:
1. Click here: https://www.facebook.com/3decades3kids/
2. For an extra entry please comment on this blogpost about your favorite part of the movie!
Disclosure: All information provided by Disney Pictures. Giveaway/sample product provided. Contact me at Diane@3decades3kids.net and @3decades3kids across all social media networks.