The other night I was lucky enough to attend the New York New Girl Party, thanks to BoysRuleOurWorld . It was hosted at the beautiful Hudson Terrace located on the Hudson River, NYC.
New Girl debuts Sept. 20th on Fox network. The lucky attendees to the party did not have to wait. As we sipped on drinks of choice and delicious delicacies, we were treated to a sneak peek of New Girl, starring Zooey Deschanel as Jess Day. Playing an adorable geeky hilarious character who is going through a rough breakup(as we all have at one point or another), she moves in with three male roommates and the fun begins!
Nick, played by Jake Johnson, Schmidt, played by Max Greenfield and Coach, played by Damon Wayan’s Jr. really sew up the cast into a laugh after laugh comedy. Jess also does have a best friend (what would life be without one) Cece, (Hannah Simone).
The complex, yet simple mix of these five characters had me intrigued with anticipation of what would happen next. This single-camera comedy shot by Liz Meriwether has just the right mix of comedy and compassion to keep us all coming back for more. I personally cannot wait to see what the upcoming season has to bring as we are introduced to New Girl.
For more information please check out
New Girl online.
Enjoy!
All opinions are that of 3decades3kids

To all the SuperDads out there,
Have a great day!

BookBoy: Diverse City by Adam Sullivan: “In case you were wondering, ‘Diverse City’ is the name of the poem I wrote. Out of all of Hudson County, they picked my poem as the first pl…” 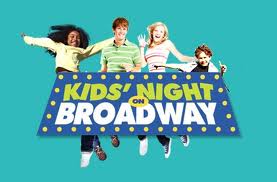 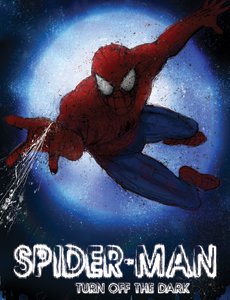 Kids Night on Broadway is taking place this week in NYC.If you enjoy taking in a Broadway show and would like to give your child that same fun experience there you should know about Kids Night On Broadway! KNOB is a great way to take your child up to age 18 to a Broadway show for FREE! For every adult ticket you buy, you can a child’s ticket to the same show free! Another wonderful part of Kids Night on Broadway is that you can go to dinner and it works the same way. You buy the adult entree and the child dines for free! You can choose a place to dine from the approved list of restaurants in the Broadway area. It’s simple! You buy the adult dinner and the child eats free! There are also special events in places around the Times Square area.
Our family has been a part of KNOB for the past 7 years and have enjoyed it each year! This year, even the new Spiderman is available!
During the past few years we have seen:
The Little Mermaid/retired
Mary Poppins
The Lion King
Mama Mia
42nd Street/retired
Beauty and the Beast/retired
Shrek/retired 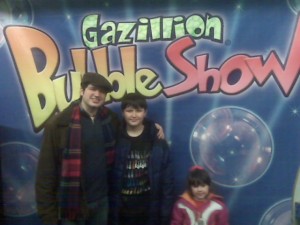 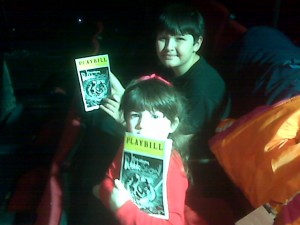 Our show was hosted by Deni Yang, who was a wonderful bubble artist since the age of four. His parents were the original Gazillion Bubble Show hosts in other cities where the show still takes place.
The show featured many, many bubbles-big and small. Deni Yang told different stories and created bubbles that not even your imagination could begin to think of. Children of all ages and adults alike were in awe of all the spectacular bubble acts! 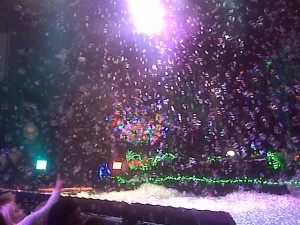 I personally loved when a little girl was taken on the stage and story was told of a little girl in Hawaii who dreamed of snow. In just a few seconds of dimming the lights and bringing them back up, the stage was transformed into a bubble paradise. There were bubbles everywhere. 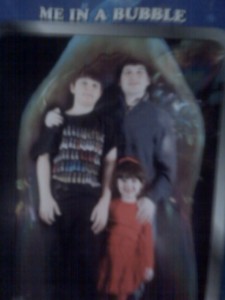 As a bonus, Deni Yang preformed a breathtaking lazer act. The music was wonderful and the audience was filled with enthusiam!

One highlight of going to the Gazillion Bubble Show is that you can get your picture inside an actual bubble! There is a special area set up that you can stand in and people raise a bubble up around you! Sometimes it takes a few tries, but they do get the picture!
If you are in the mood for a fun afternoon with the family, The Gazillion Bubble Show is a great choice! There are also plenty of “take home” bubble fun items to purchase and take home for your own bubble fun! 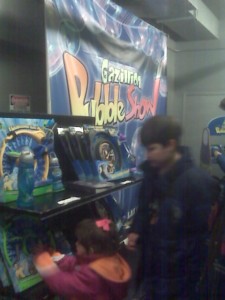 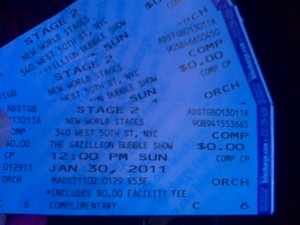 For more information please visit:
http://www.gazillionbubbleshow.com/index.html
For a Great Mommy Network and a chance to win great prizes like show tickets please join: http://www.mommyslinks.com/
Please LIKE 3decades3kids on fb at:
http://www.facebook.com/pages/3decades3kids/195058930508732