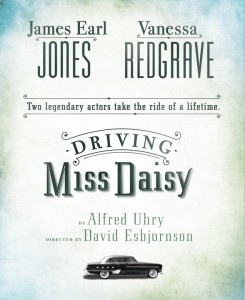 01.12.2011– The Broadway company of Driving Miss Daisy has announced that they will add a ninth performance to their already scheduled eight-show week in order to perform a benefit performance on Monday, February 7 at 8pm. All proceeds will go toThe Actors Fund, a national human services organization that helps those working in performing arts and entertainment.

Starring James Earl Jones, Vanessa Redgrave and Boyd Gaines, Driving Miss Daisytells the affecting story of the decades-long relationship between a stubborn Southern matriarch and her compassionate chauffeur. Variety said, “Redgrave and Jones are masters of their craft,” and The New York Post called it, “a driving force of nature.”
The performance will be held at the Golden Theatre, 252 West 45th Street in New York City. Premium seating is available for $225.50 and regular seats from $66.50 to $126.50.
To purchase tickets, visit www.store.actorsfund.org, call 212-221-7300 ext. 133, or email tickets@actorsfund.org. Tickets can also be purchased through the Golden Theatre box office.
About The Actors Fund
The Actors Fund is a non-profit that serves professionals in film, theatre, television, music, opera, radio and dance, helping nearly 12,000 people directly each year, and hundreds of thousands online. The Fund’s programs include social services and emergency assistance, health care and insurance, housing, and employment and training services. With offices in New York, Los Angeles and Chicago, The Actors Fund has – for over 125 years – been a safety net for those in need, crisis or transition. Visit www.actorsfund.org for more information.
About Special Performances
Special Performances are among the most thrilling theatrical experiences, and the hottest tickets in town. Broadway companies generously give their time and talent by adding these special shows to their already rigorous schedules, and perform for audiences full of their peers from the entertainment community. Proceeds from all Special Performances benefit The Actors Fund.
http://daisyonbroadway.com/
press release:social media
0 Flares Twitter 0 Facebook 0 Pin It Share 0 Google+ 0 Email -- Filament.io 0 Flares ×