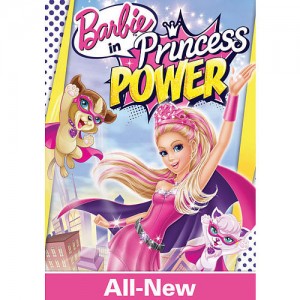 Know a Barbie fan? In our house we have a huge Barbie fan. Emily is pretty much obsessed with Barbie and Barbie and Barbie and all things Barbie. I was not sure how she would feel about Barbie in Princess Power, but when I asked her is said it looked Awwwwwesoome! So, that’s all I need to know. Looks like we will be adding this one to our collection!

SYNOPSIS: Barbie™ stars as Kara™, a modern-day princess with an everyday life. One day, after being kissed by a magical butterfly, Kara™ soon discovers she has super powers allowing her to transform into Super Sparkle™, her secret, crime-fighting alter ego who flies around the kingdom ready to save the day! But it’s not long before her jealous cousin catches the butterfly and also transforms – this time into Dark Sparkle™, her nemesis. Their rivalry takes to the skies, but when they discover the kingdom’s true enemy, can they put aside their differences to form one super team? Soar to new heights and discover that there’s no greater power than the power of friendship!

ENTER HERE: Enter on Rafflecopter. If you are using a mobile device it may take a few minutes to load. First entry is leaving a comment to answer this question: Did you have a Barbie when you were a child? I did, and I’m sure that is why Emily loves Barbie. I wish I had kept some of mine. It would have been awesome to show her my own. Giveaway ends March  2nd at 11;59pm. Winners will be contacted immediately via email. Winners have 24 hours to respond to email to claim prize. 18+/USA. Thank you . Diane Disclosure: Giveaway products provided by Universal Pictures as part of our partnership. All opinions are mine and honest. Contact me at 3decades3kids@gmail.com and everywhere else as @3decades3kids.