Disney Infinity 2.0
This Game IS A Must Have For Your Family
#HolidayGiftGuide 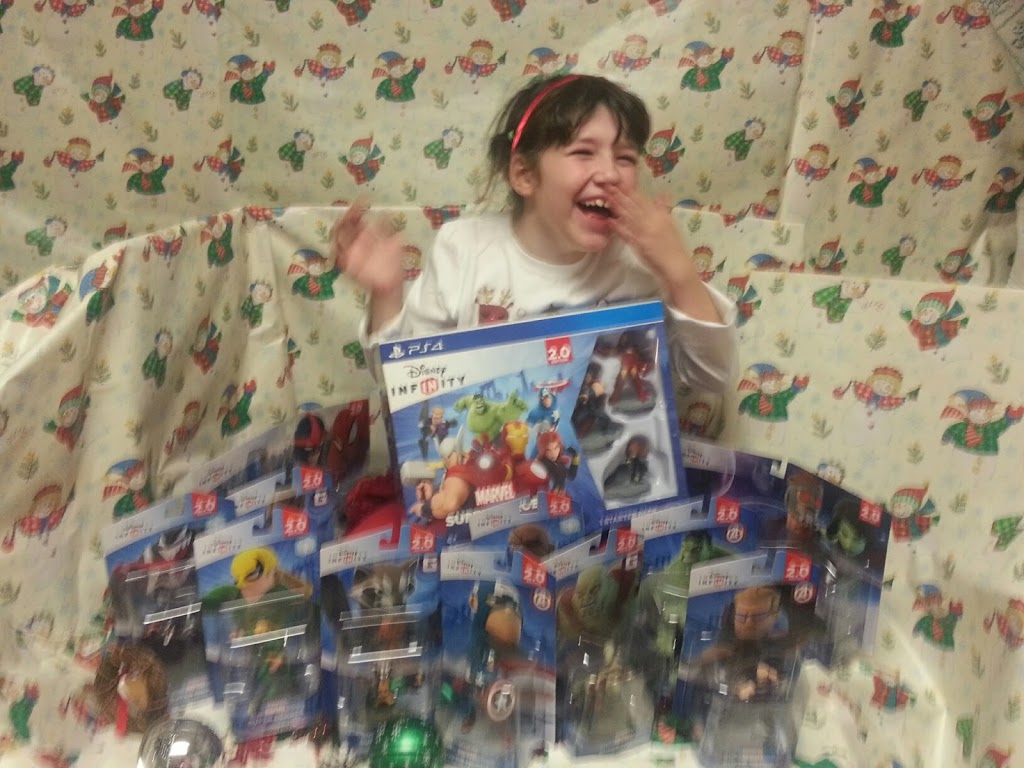 Looking for a game that will entertain the entire family? Looking for the perfect answer to family gaming night? We have found the perfect answer just for you! Of course I would know this because we are a Disney Infinity Family! We love the game and it just keeps on getting better! It’s like a dream come true that just keeps on going! Disney Infinity 2.0 Edition: Marvel Super Heroes is a major hit! The game, which recently released on Xbox One, Xbox 360, Playstation 4, Playstation 3, Wii U, iOS, and Microsoft Windows,  is a perfect follow-up to last year’s Disney Infinity, building on all of the first game’s great features to create something bigger and better than Disney Infinity fans could have ever imagined!

Disney Infinity 2.0’s first major stride is that it introduces characters from popular Marvel franchises like Spider-Man, The Avengers, and Guardians of the Galaxy. Never before has a video game allowed kids to play with heroes like Iron Man and Rocket Raccoon alongside classic Disney characters like Donald Duck and Tinker Bell (both also new for this game)– it’s an awesome plus to 2.0’s improved Toy Box mode.

Also new for the Toy Box of Disney Infinity 2.0 is the ability to design interiors and connect toy boxes with doors. Using these two new features, players essentially gain limitless building space for their toy boxes, and can customize their play area inside and out! Featuring hundreds of new items and the potential to save up to 100,000 individual toy boxes, Toy Box Mode is more lively than ever in Disney Infinity 2.0! 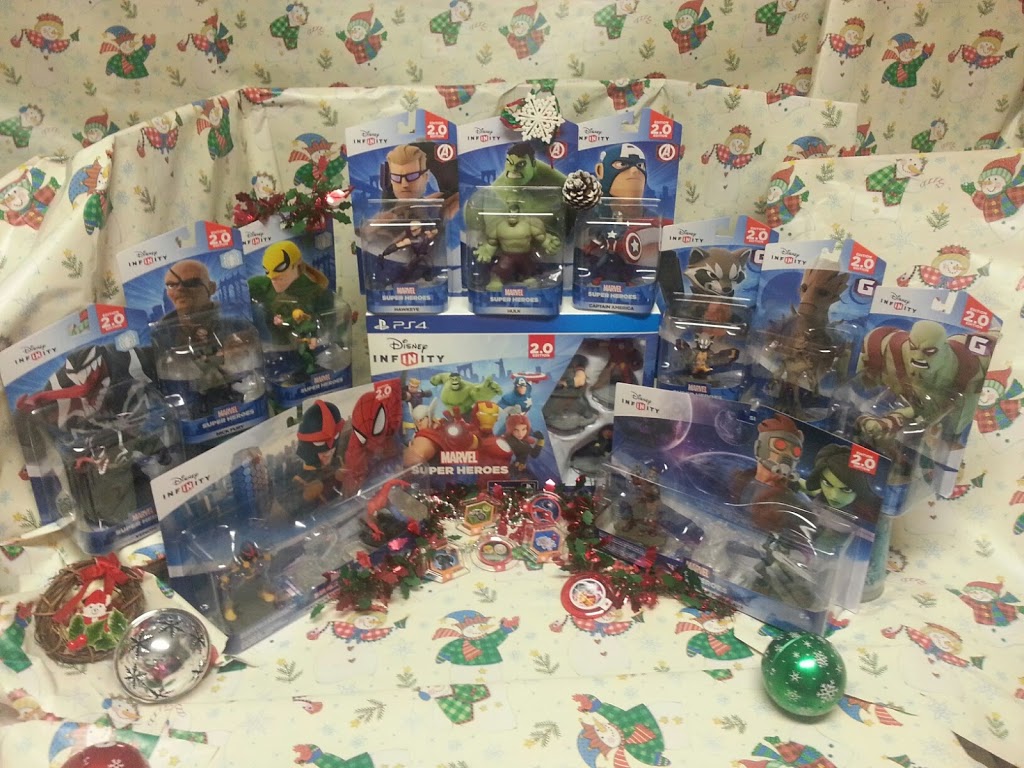 Of course, Disney Infinity 2.0 doesn’t only feature new items in-game. A slew of new power discs have been released (and more are on the way!) to incorporate new toy box themes, vehicles, weapons, costumes, and the newly added team-ups. Team-up discs let players call in ally characters like White Tiger, Ant-Man, and the Winter Soldier to fight enemies alongside them. And power discs aren’t all, either! Disney Infinity 2.0 boasts the addition of 30 new characters (and two that are still to be announced!) from both the Marvel Super Heroes stable and the Disney Originals lineup, putting the Disney Infinity roster at more than 50 playable characters overall! 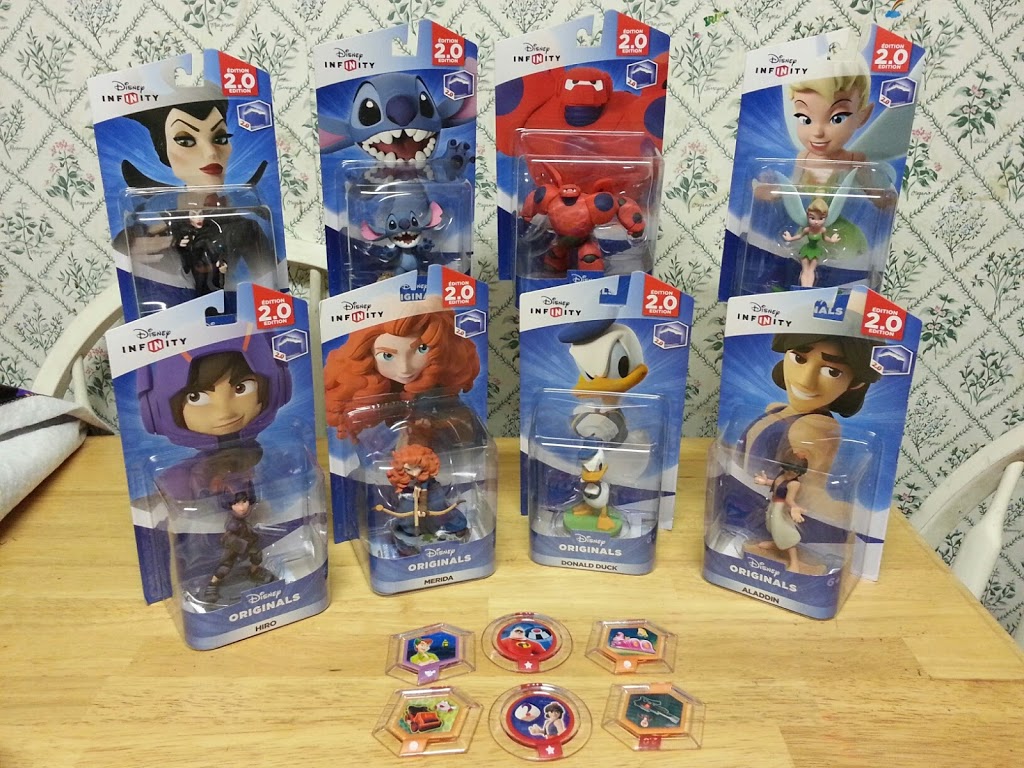 Disney Infinity 2.0 Edition: Marvel Super Heroes is a blast to play for Disney, Marvel, and video game fans of all ages– it’s a huge hit in our house, that’s for sure! My oldest son loves playing the campaign-driven play sets and building challenges in Toy Box, while my middle son is enamored with the level of detail he can put into interior environments thanks to the new items and design options… and my daughter (the youngest) just has a great time running around in the Toy Box and exploring her brothers’ creations– while adding a few of her own sometimes too!
Disclosure: Disney Interactive provided me with product samples in order to facilitate this review. No compensation was provided for this post. All opinions are honest. Contact me at ELGEorgia@aol.com.
Wubble Bubble Ball
Is Fun For All 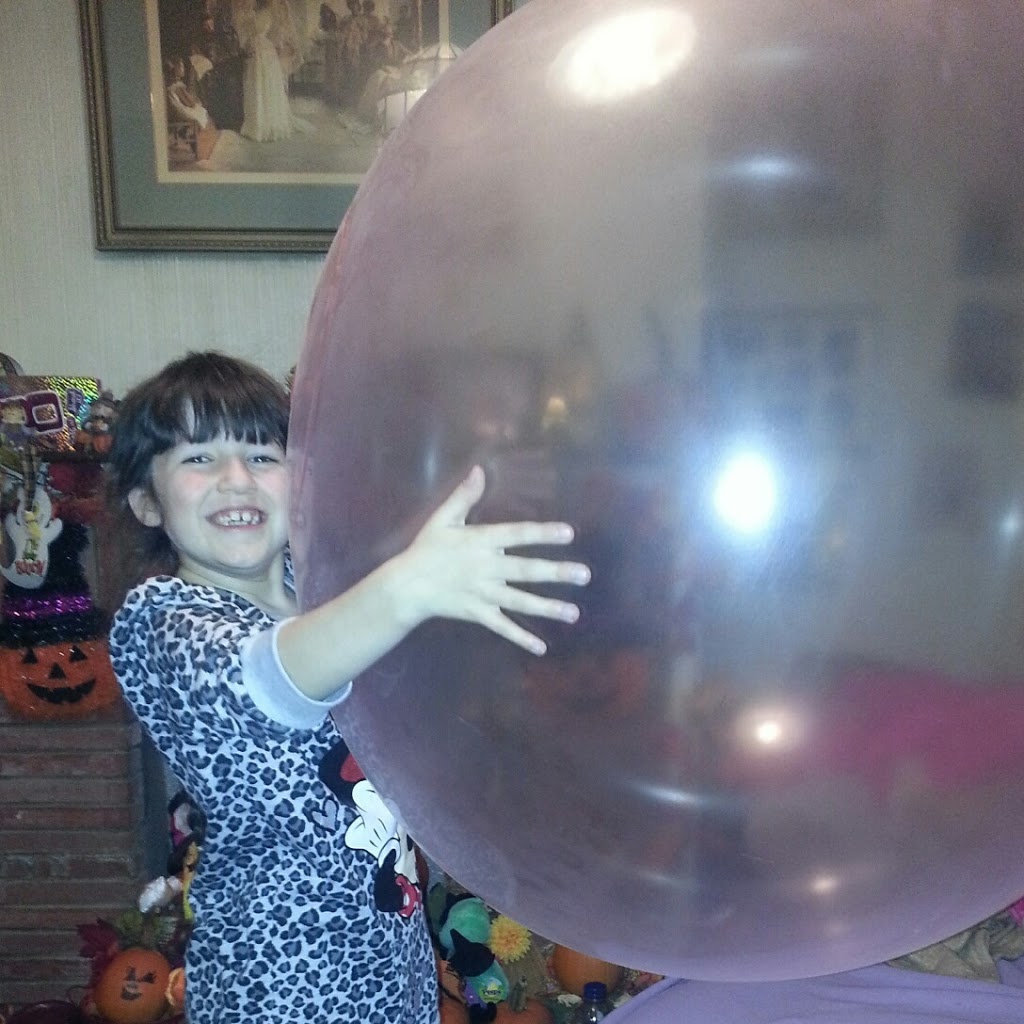 Our family is always in search of fun things to do. We are also challenged with trying to get our family unplugged and just spending time together. Getting outside is a great way to spend time together. Recently at Blogger Bash NYC I was introduced to Wubble Bubble Ball. It’s a gigantic ball with a bubble feel to it. Immediately I loved it! It was something I could just picture my entire family having fun with . 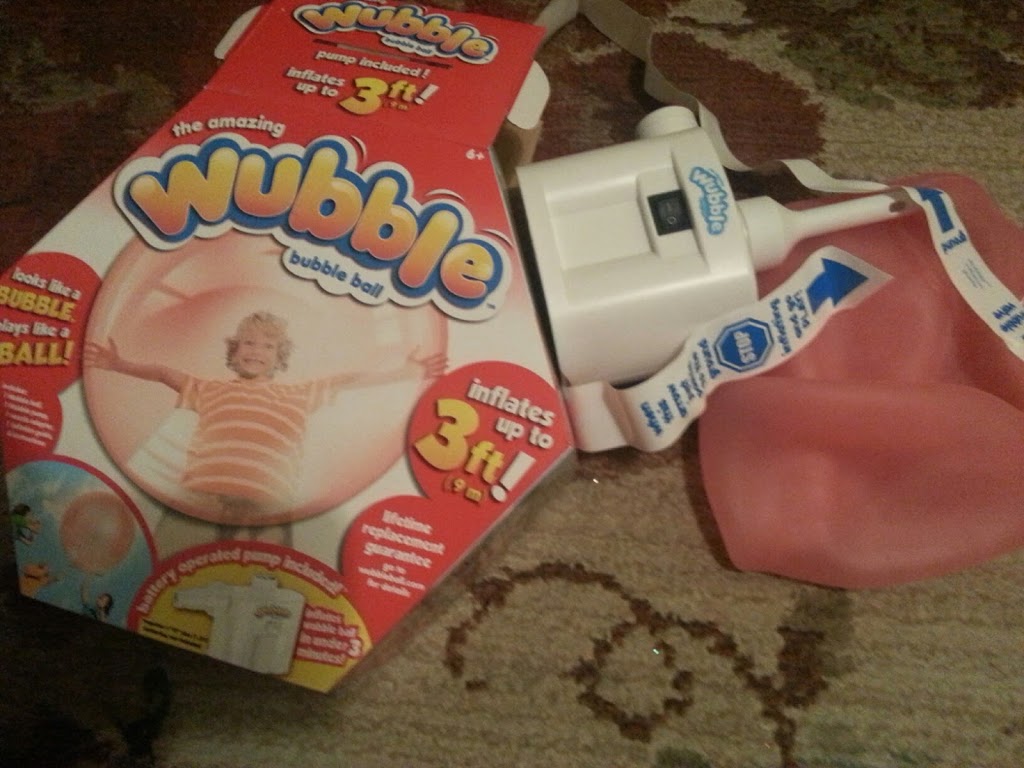 Wubble Bubble Ball comes along with its own battery operated inflation pump. You will need to buy four D batteries, not included. Although it says that the ball will inflate in two minutes, it took us a bit longer to get ours up and running. Make sure you read the directions carefully. Another thing I think is great is the replacement policy. You can mail back a part of the Wubble Ball and they will replace it for $6.99, worth it!
But, we did not worry about a pop at all and our ball got quite a workout! 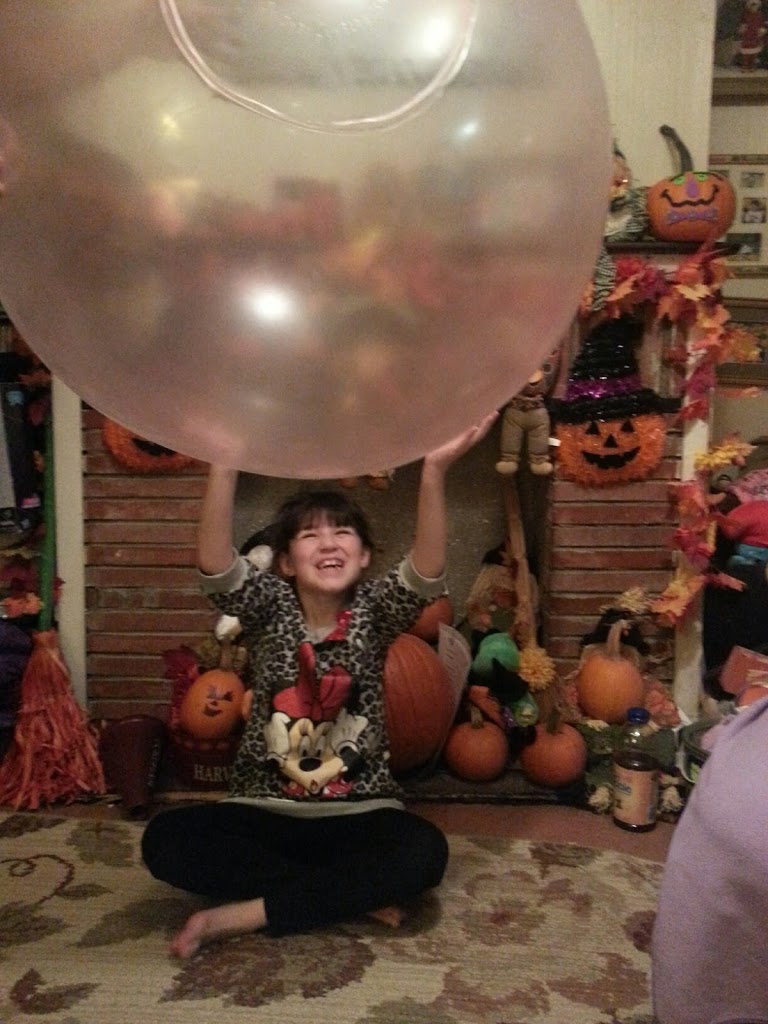 Wubble Bubble Ball is a great product! Our entire family LOVED the fun we had with it.  If you are looking for something kids of all ages, including college aged kids with little sisters or brothers this is an awesome choice! Since my family goes with kids from age 7-22, we are always looking for something we can do together! Well, we found it with Wubble Bubble Ball! We inflated it in the house and LAUGHED at the size of it! It’s huge!! We did play it in the house but soon took to the outside. We took it over to the park and had a “BALL”!. PS. You cannot be on your cell phone and play, so it’s a great way to just unplug and enjoy life! Makes a great gift, or just a family time fun gift for yourself!
Check it out here: http://www.wubbleball.com/
Disclosure: Our family was provided with Wubble Bubble Ball in order to review it. Sponored.. All opinions are honest. Contact me at ELGEorgia@aol.com.
This Year’s Macy’s Thanksgiving Day Parade
Is Going To Heat Up
With Skylanders’ Eruptor! 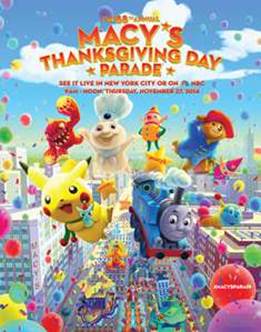 Every year one of the biggest days in NYC is when the preparations begin for the upcoming Macy’s Thanksgiving Day Parade. The excitement builds the closer it gets while everyone waits to get a glimpse of the gigantic balloons and talent that will fill the streets on Thanksgiving Day. Our family stops everything Thanksgiving morning so we can all share in the fun of the big parade! This year we were very thrilled to hear the big news from Skylands! Skylanders, the popular kids video game that brings physical toys to life, is taking flight in the Macy’s Thanksgiving Day Parade for the first time! Fan-favorite Skylanders character Eruptor will join the prestigious collection of balloons at the parade, marking a significant pop culture milestone for the franchise. I don’t know about you, but our family loves Skylanders!! This will be awesome! 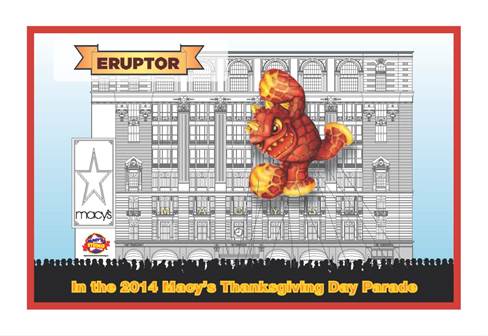 To re-create Eruptor’s smoldering physique, artists used more than 40 gallons of florescent paint and five barrels of glitter! The live broadcast of the Macy’s Thanksgiving Day Parade will begin at 9 a.m. all time zones on NBC. Here’s a sneak peek of just what you can expect to see [above]. It’s an artist’s rendering, so you will have to tune in Thanksgiving morning to see the real thing, or join us the night before Thanksgiving for the inflation and of course AT the parade!