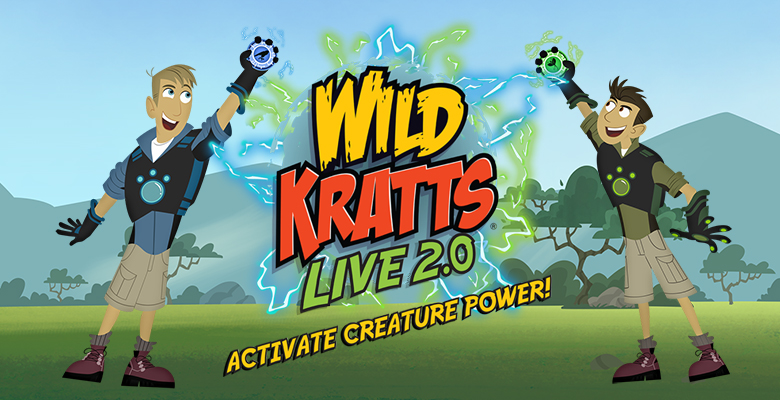 All-New Action-Packed Touring Production Brings the Stars of the

At the Beacon Theatre

Our family have been Wild Kratts fans forever! There is nothing better than a perfect mix of fun and education is there? [It’s going to be WILD! Young fans and their families nationwide are in store for even more adventure on the creature trail when the world-famous Kratt Brothers hit the road with an all-new stage adventure! Wild Kratts® LIVE 2.0 – Activate Creature Power®!, the theatrical production starring Martin and Chris Kratt, based on the Emmy-nominated hit PBS KIDS series, will bring audiences along on a “wild” ride with a dynamic mix of live-action and animation. The stage show will be at the Beacon Theatre on Saturday, April 13 at 2pm and 6pm. For information on how to purchase tickets, visit www.wildkrattslive.com. Tickets are available via Ticketmaster.com, or at (800) 745-3000 (tickets are not available at the Box Office the day of the performance.)

“We are so excited to introduce our new live stage show and meet our fellow ‘creature adventurers’ in cities across the U.S. this fall,” said Chris Kratt, creator, producer and co-star of the Wild Kratts series and co-founder of The Kratt Brothers Company. “Wild Kratts LIVE 2.0 is perfect for explorers of all ages. It features all the excitement and interactive elements that Wild Kratts fans love, plus awesome new Kratt Brothers twists and turns to keep them on the edge of their seats.”

In Wild Kratts LIVE 2.0, Chris and Martin take to the stage to activate new Creature Powers and go “off to the creature rescue!” With some help from Aviva and the rest of the Wild Kratts team, who will be animated and on screen at the Tortuga HQ, the brothers confront a comic villain and once again save the day, sharing fascinating tidbits about some of the world’s most amazing creatures along the way.

Audience members are encouraged to bring along their animal knowledge and participate in the action right from their seats by calling out answers to the questions posed by the Kratt Brothers during the show. Since their original Wild Kratts LIVE! touring show launched in 2014, Chris and Martin have performed to wildly-enthusiastic crowds of hundreds of thousands of fans – many of them sporting their own Creature Power Suits, just like the Kratt Brothers do in the popular series – in more than 135 cities across North America.

Produced by The Kratt Brothers Company and 9 Story Media Group, the popular live-action and animated Wild Kratts television show just received its sixth Daytime Emmy nomination for Outstanding Children’s Animated Series. The show airs daily on PBS stations nationwide (check local listings) as well as the new PBS KIDS 24/7 channel and live stream. Now in its sixth season, Wild Kratts is one of the top 3 rated shows on PBS KIDS and the #1 show site and streaming site on pbskids.org. The series is also a top performer on Amazon Prime.

Wild Kratts follows the animated versions of the Kratt Brothers and their friends on hilarious expeditions with wild animals from around the world, complete with animal-inspired gadgets and awesome Creature Power Suits that enable the adventurers to get close to the creatures. Every episode explores an age-appropriate science concept central to an animal’s life and showcases a spectacular wildlife moment, presented with engaging stories of mystery and rescue as well as the Kratt Brothers’ signature brand of laugh-out-loud comedy. The real-life Chris and Martin introduce each episode with a live-action segment that imagines what it would be like to experience a never-before-seen wildlife occurrence and sets the story in motion. Wild Kratts airs in more than 180 countries and is available in 18 languages.

GIVEAWAY: One lucky reader will win a PAIR of TICKETS to Wild Kratts Live at the Beacon Theater in NYC on April 13, 2019 at 6pm. Please be sure you are available before entering the giveaway. The tickets will be available via Will Call at the Beacon Theater in NYC approx one hour before show time. The tickets are only good ON April 13, 2019 at the 6pm show.  To enter please email me at 3decades3kids@gmail.com with Wild Kratts in the subject line and tell me in the email about your favorite animal! Winner will be chosen via random.org on April 7th, 2019 at 11;59 pm and notified by email they entered with. Winner must respond within 24 hours to claim prize or a new winner will be chosen. (Prize consists of 2 tickets to the April 13 show at 6pm) Good Luck all!

Disclosure: All opinions are that of Diane Sullivan and do not reflect the views of the parent company represented. Contact me at 3decades3kids@gmail.com or @3decades3kids across all social media networks. Giveaway tickets provided by The Wild Kratts Live!