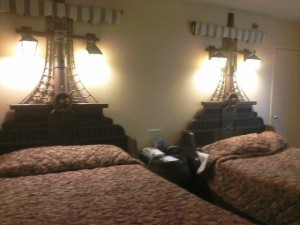 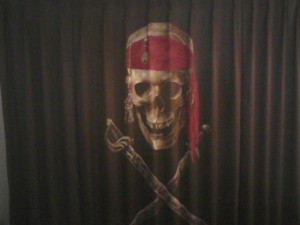 A Must for Pirate-Lovers!
Do you like pirates? They are a family favorite in this house, so we could not resist booking the Pirates Room at the Caribbean Beach Resort. We were definitely not disappointed!
As we entered our room
we were “taken over” by the pirate theme. It was wonderful. The beds were ships, with ship bottoms-complete with cannon holes! The fridge was a big barrel. The dressers were ship crates and pirate chests. My personal favorite was the curtain that separated the bedroom from the bathroom area. There was a fantastic pirate themed curtain 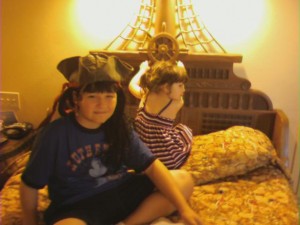 ! At night when the lights were out, except for the bathroom area, the pirate seemed to be illuminated!
Of course, we did bring and pick up a few pirate items ourselves…like Mickey Pirate lollipops, pirates tattoos, pirate soap from the Basin, and Adam brought along his pirate hat and suitcase! If you have a chance to book the Pirate Room at CB, don’t miss out! It was arrrrggggg–rageous!!
0 Flares Twitter 0 Facebook 0 Pin It Share 0 Google+ 0 Email -- Filament.io 0 Flares ×